Cinevideo Host Broadcaster of the Six Nations and the Autumn Nations Series of Rugby in Italy. 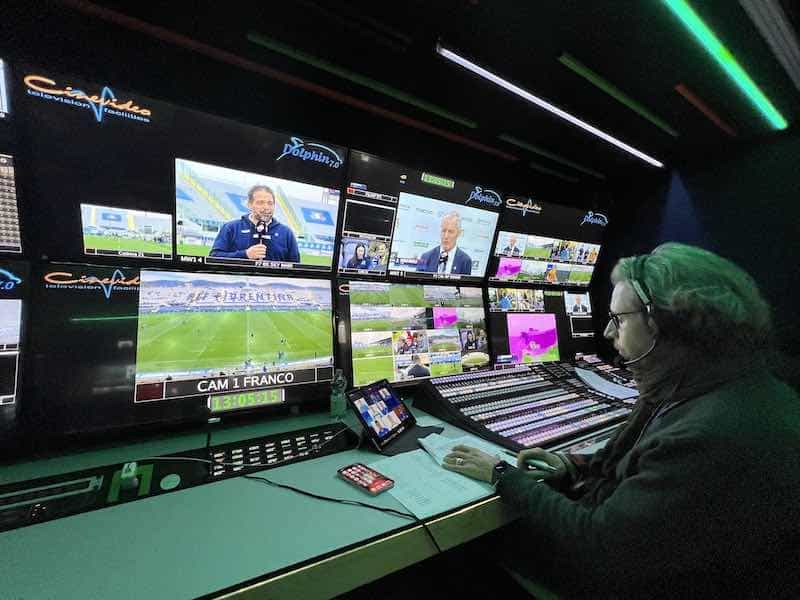 This is the second year in which the well-known Cinevideo television service has carried out the full television production of the rugby matches of the Six Nations tournament, and of the Autumn Nations Series. Presspool asked Andrea Buonomo, Executive Sales Manager of Cinevideo Srl, for some details.

What are the most interesting aspects that Cinevideo dedicates to the rugby technique?

“In summary, a high number of cameras, the management of the TMO, and a unilateral SKY Italy on field studio customization, small but well-equipped with the new Sony PTZ camera ILME-FR7. 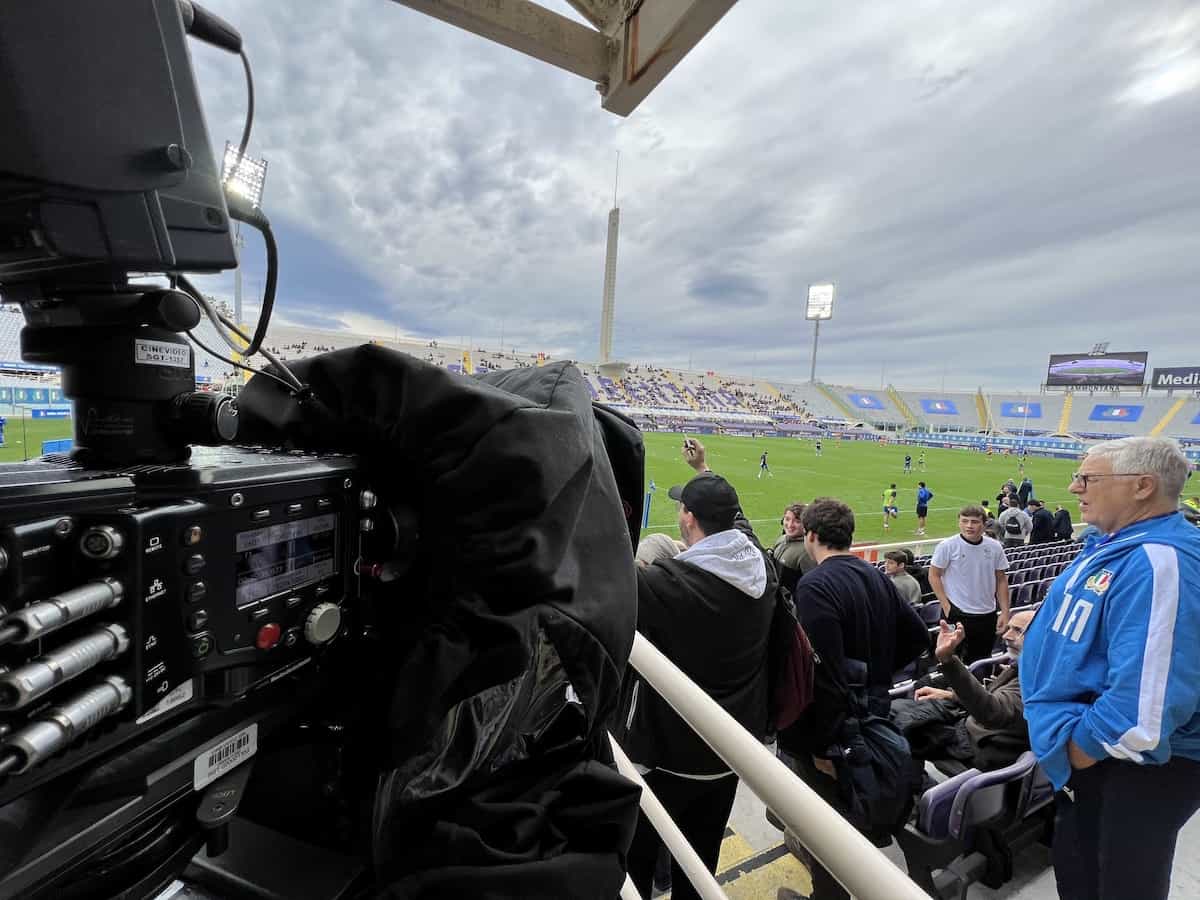 Starting from the management of the TMO Television Match Official, similar to the VAR in football, today rubgy is entrusted to an English-speaking operator, precisely to better interface with the referees who are often native English speakers, even if we are training making Itaian operators to specialize.

All this takes place live: both the audience in the stadium and the referee on the pitch can see the same images that are proposed by the TMO. 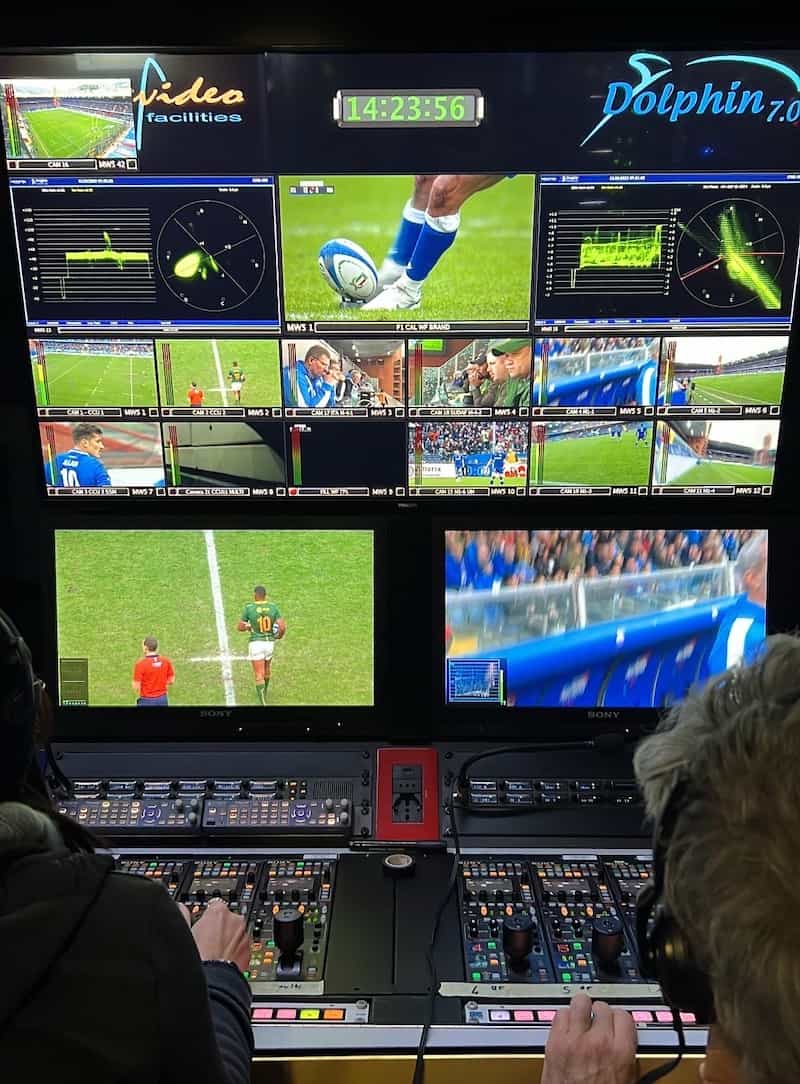 The audio commentary between the two referees is also on air and all 22 cameras used on the production can be interlocked for the replay; of these 6 operate in Supermotion at 75 Fps and one in UltraEmotion at 600 Fps.

Four of these cameras are connected via RF links with radio frequency systems supplied by EI Towers.

All cameras are used for replays with 34 recording channels on the EVS network and an operator is dedicated to supporting the referee in the gallery who has the possibility to see all the angles being recorded. This in turn can propose to the referee on the field the "offending" action and from the best useful angle”. 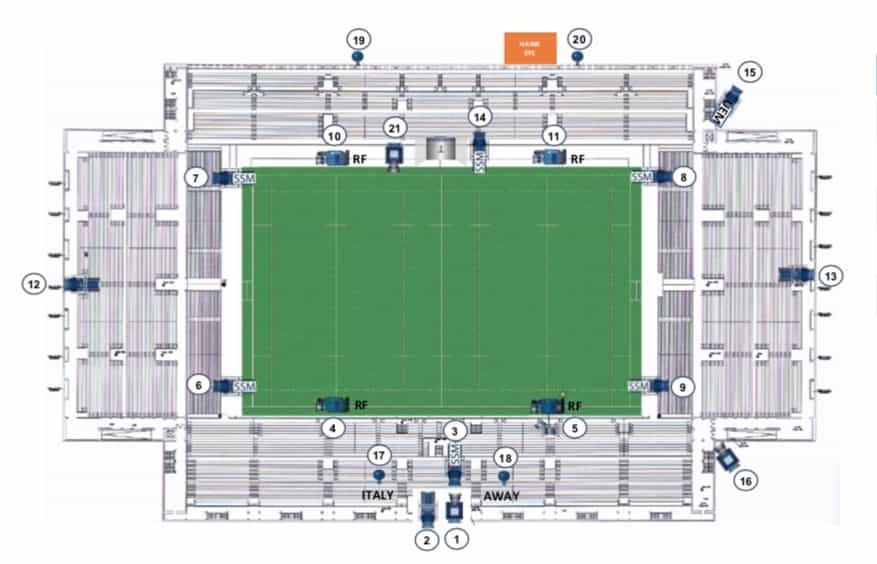 Here you are only busy as a host broadcaster or also for one-sided customization and which ob-truck do you show off?

“The last match was played in Genoa on November 19 and the production is headed by SKY Italia.

Cinevideo has been their rugby reference service for several years and for the second year we have engaged the double mobile direction Dolphin 7.0 which produces a production in HD 1080i.

The camera plan is shared by all competitions and therefore all matches have a similar camera layout.

On board the same vehicle, in addition to the direction for the international feed by Roberto Montoli, a second independent direction also simultaneously carries out the unilateral customization for SKY Italia.

This customization was created with two cameras and for reasons of limited space in the sideline studio, it was decided for the first time to use a full frame Sony PTZ remote camera ILME-FR7. It is a new model that allows filming with a cinematic look, mounted on a very space-saving rail.

In this mini studio, almost a corner, the two talents commented on the pre and post match.

The second customization camera took care of making the "flash interviews", always in the field”. 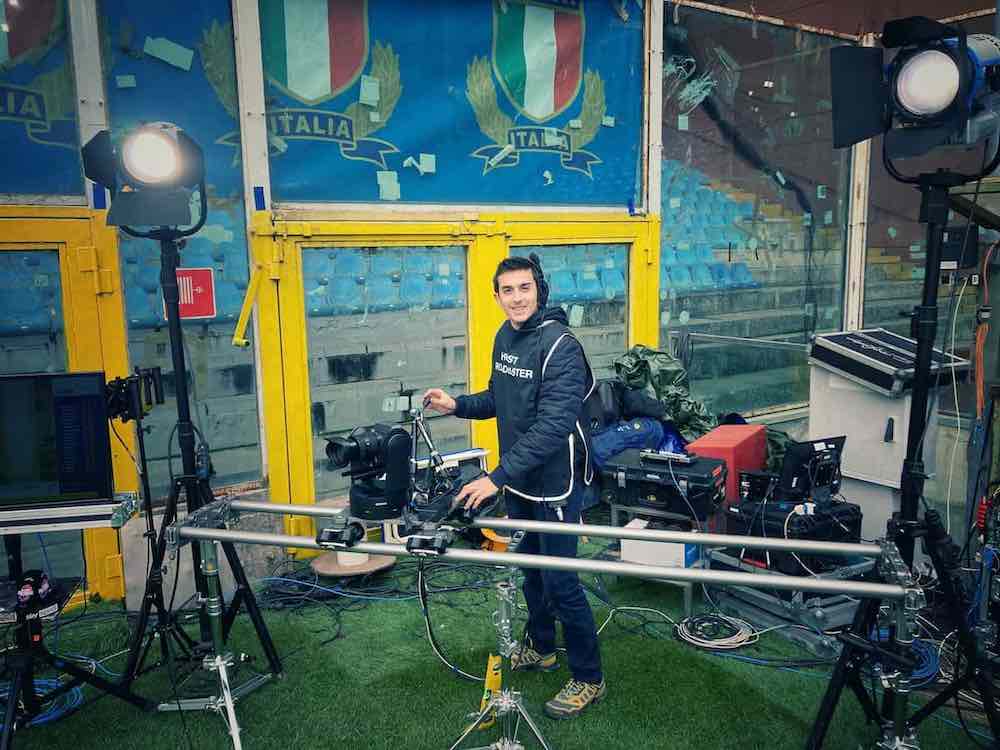 Was the team work quite articulated, given the many sources, twenty-two shooting points, a massive commitment of special supports, slow motion, super slow motion, cinema camera, many feeds, and many service links?

“The team at work consisted of 55 technicians with 22 cameras for the host and two for SKY.

Among the special shooting supports there were two remote PTZ cameras in the locker rooms, to offer silent images of the teams returning from warm-up or after the interval and when they were about to go out on the pitch.

Two other PTZ cameras took care of filming the coaches because, unlike other sports, in rugby the coaches are in the stands away from the pitch to better see the dynamics. 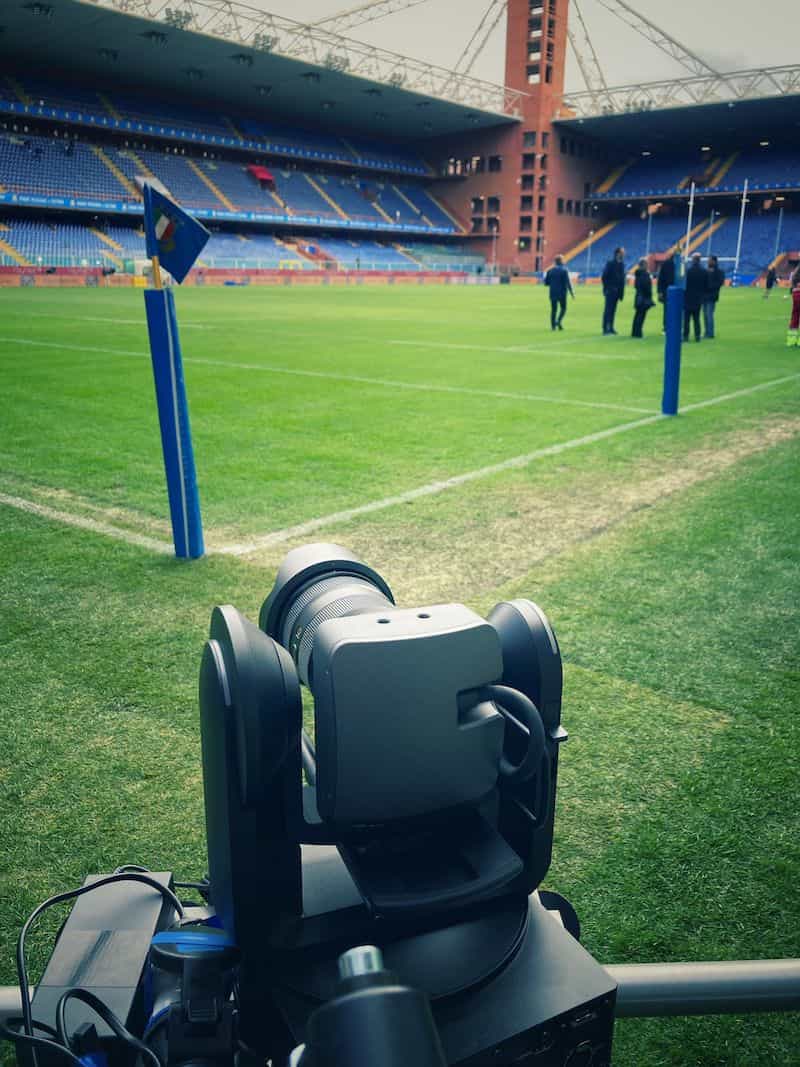 So we placed a PTZ camera for each of them that followed them throughout the game hoping to catch any reactions to the game.

A steadycam is on the pitch to follow the game but also for the line-up of players.

There were nine EVS technicians; we also delivered several signals to the analysts of the respective teams, who were also placed in the stands, which are used for tactical purposes.

The referee's voice, which is always present and audible in the live stream, ends up becoming an important third voice alongside the two commentators throughout the match. 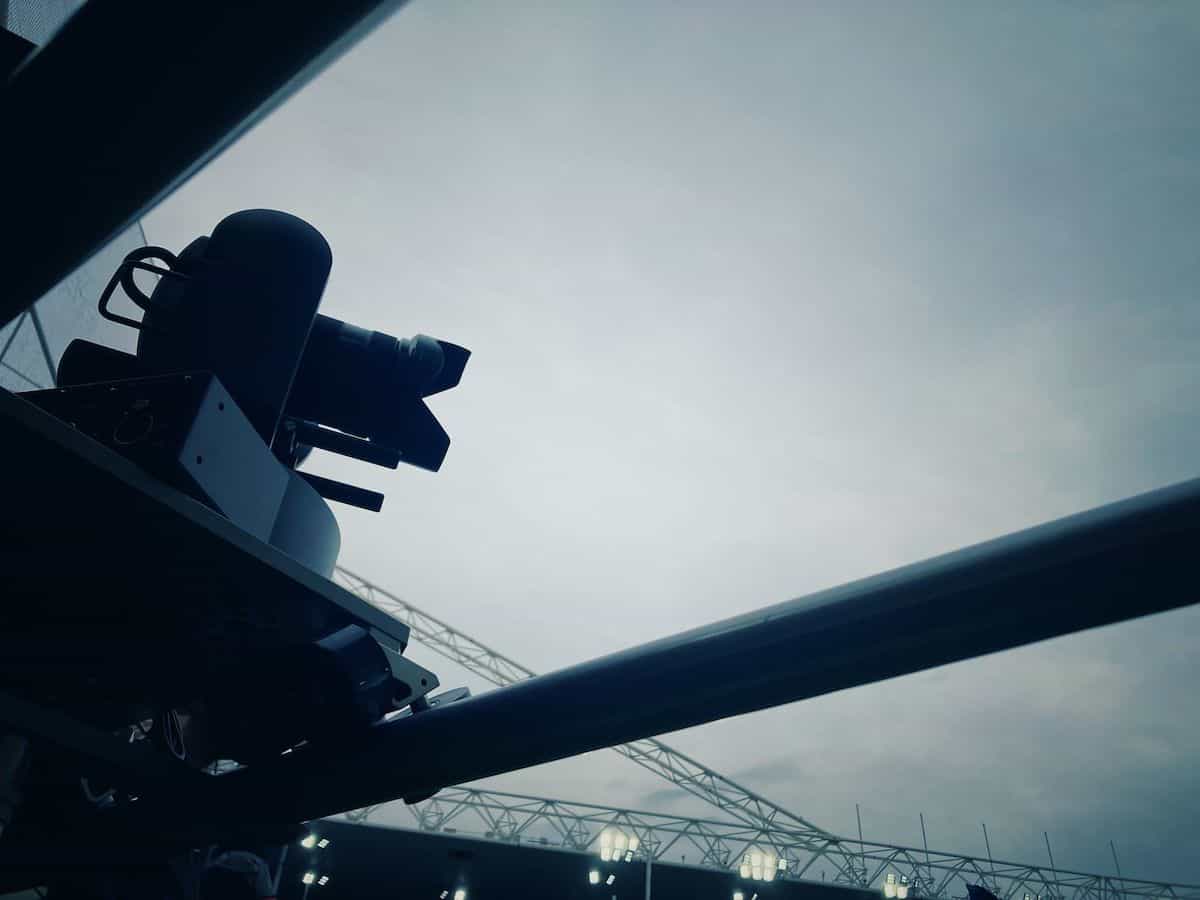 There are so many cameras, for a complex lay-out and include four on the long side of the field, two in favor and two reverse over the shoulder which are excellent for the touch.

Other four are the Supermotion placed at the corners of the field, called TMO, since they are the first reference ones for referees.

Two more are considered tactical and placed left, right, up in the corner; a reverse Supermotion is in the field, dedicated to reverse shot images, then, importantly, the Ultraemotion, positioned in a corner, which can work up to 2000Fps according to shooting needs and up to 600Fps in "triggerless" mode. 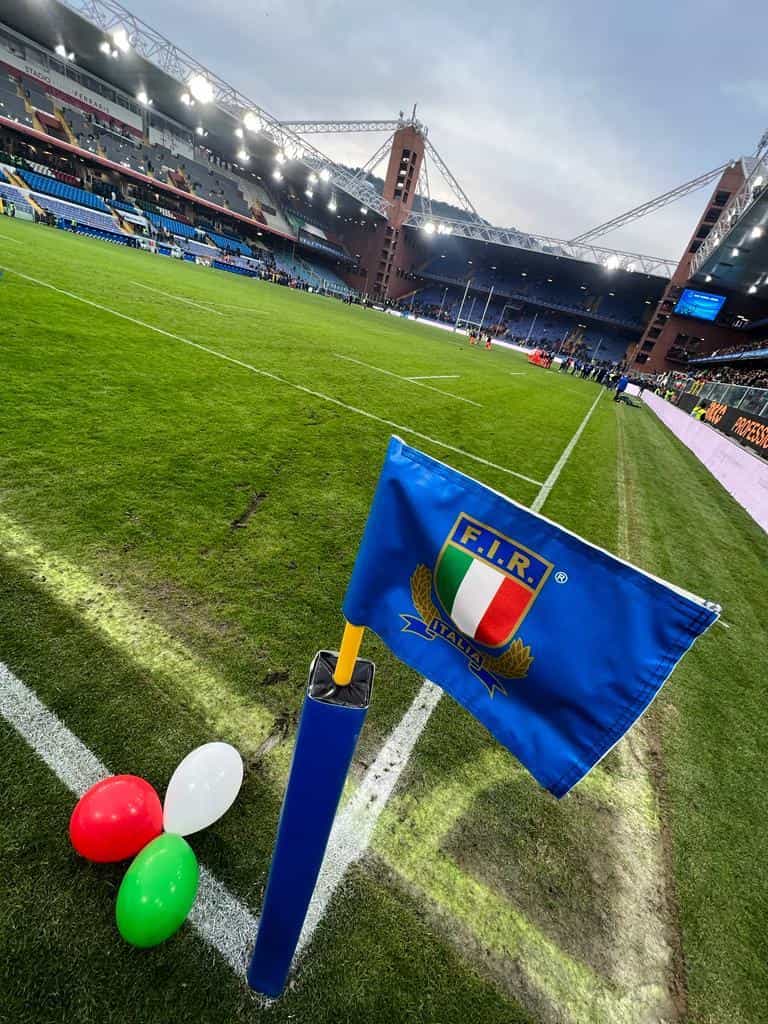 Triggerless indicates operating mode without the use of a buffer (typical of high speed cameras) and allows the replay operator to have the replay immediately available without having to "acquire" the slowed down images. In practice, it's like working with a classic supermotion but at 8 times faster speeds.

The high speed cameras are the American Phantom HighSpeed ​​by Video Research. 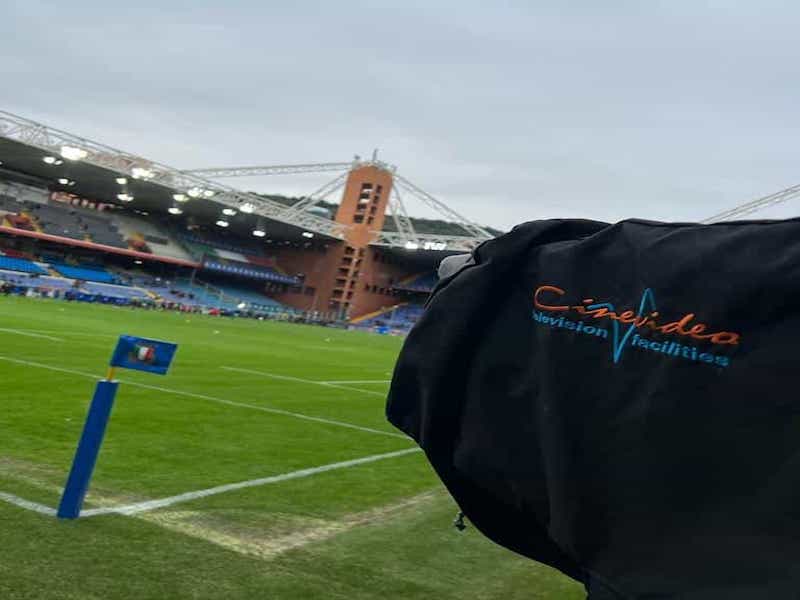 Cinevideo also guarantees audio coverage in stereo and also the interface with an external company - appointed by the International Federation - which guarantees the entire complex communication system of the referees (with each other, linesmen, with the direction, main referee).

Each event of this kind requires about two days of preparation plus that of the match.

The international world feed signal is delivered to a redundant uplink, while SKY Italia uses optical fibers to transport the national signal to the Santa Giulia headquarters.