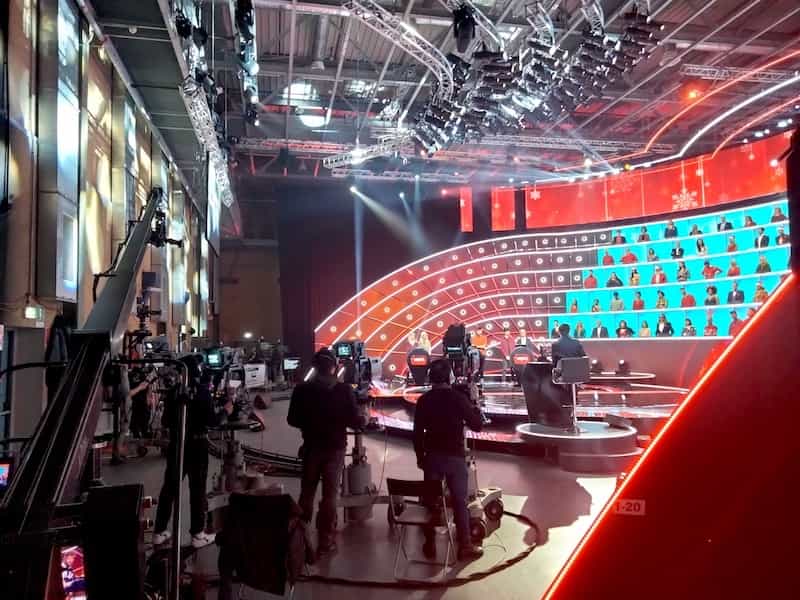 An ambitious quiz show where statistics are fun.

Over 160 planned episodes are to be recorded in 60 days with a technical crew of 12 professionals.

A dedicated filming studio, Studio 5 of approximately 1100m2, of 3zero2 Studios, part of the EMG group, in the centre of Milan, via Deruta.

Great technologies involved, 11 cameras, 15 microphones, 6 gaspedestals, a dolly, a Jimmy Jib, and a complex intercom system with 6 panels plus radio headphones, in addition to the intercoms present in the control room.

A recording on 7 signals and a resident direction in HD to make the most of over 160 episodes.

These just listed are just some of the production numbers of Banijay's well-known program, "100% Italy", which also includes the special "100% Christmas", broadcast on TV8, within the SKY bouquet. 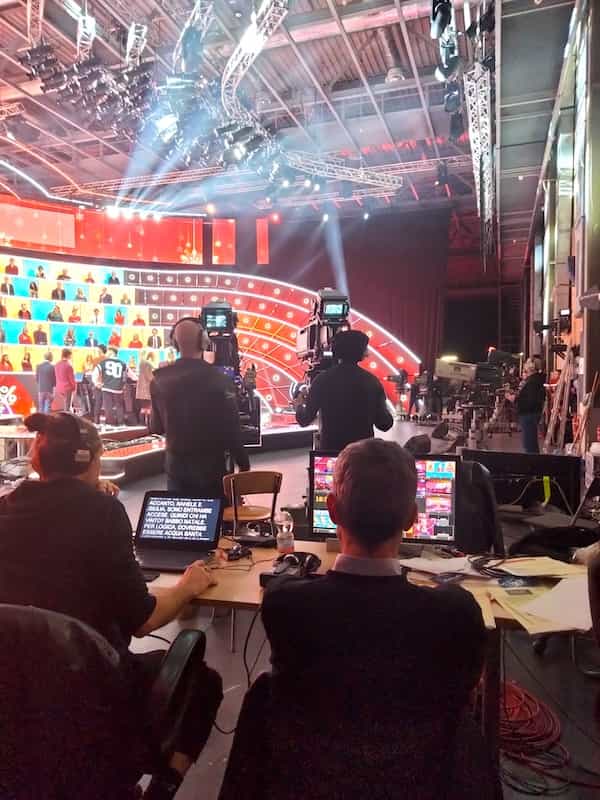 “The broadcast - says Alessio Guetti executive producer for Banijay - comes from an original format by Banijay, written by Francesco Lauber, and stages a game show based on statistics. It involves a sample panel of 100 Italians, physically present in the studio, who becomes at least as active participants as the two pairs of challengers".

The contestants, who take turns in the game challenging each other for a jackpot that changes from time to time, must try to guess the tastes, habits and even the perceptions of Italians on various topics, not general culture as usually happens in typical quiz shows.

The 100 people present who represent an Italian statistical sample to form 100%, are chosen based on indications from Nielsen, a worldwide established statistics company.

During the episodes, Livio Gigliuto, vice president of the Piepoli Institute, a statistical institute with a more Italian physiognomy, is also present in the capacity and function of an expert.

Along the lines of the typical notary of the famous TV history quizzes, he follows the game and suggests decisions; the program is then orchestrated by Nicola Savino as a presenter.

The answers of the two pairs of competitors, who challenge each other in prime time, are correct or incorrect depending on the adherence to the statistics proposed by the 100 champions and not only based on general knowledge, therefore the show focuses precisely on trying to guess the tastes of the Italians. 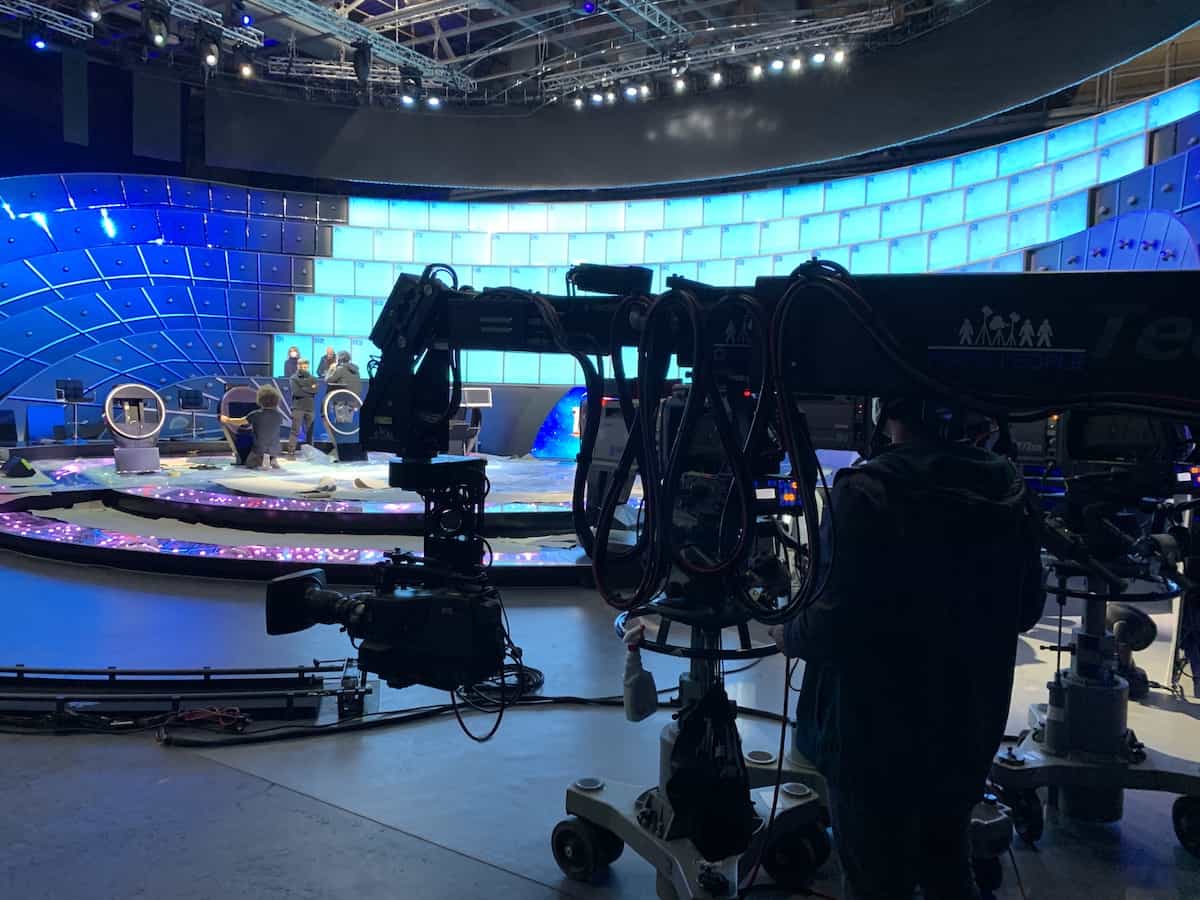 "The setup in the studio" - continues Alessio Guetti - "is very impressive, in fact, the enormous scenography was built from life in one of the major studios inside the production centre via Deruta in Milan, precisely in the spaces of the Studio 5, of about 1100m2.

Banijay's production also uses some annexed spaces, including dressing rooms, tailoring and a make-up room: in short, we have everything we need to make the best of all our television productions and in fact, the partnership with 3zero2 Studios has been working for years".

This scenographic background, which constitutes the recurring visual setting in this Monday to Friday appointment on TV8, completely covers one of the longest sides of the television studio and involved a considerable design effort.

The imposing structure is in self-supporting iron; covered with decorated wood, it collects 5 rows of 20 boxes, each able to accommodate a panellist: practically 5 floors of scenography have been recreated, reachable by three flights of hidden stairs and equipped with double entrances to guarantee safety.

Behind these boxes, up to the ceiling, a led wall was installed, divided into 100 parts, which illustrates the results of the votes during the show.

It lights up at each vote to indicate the result of each station: each sample person also constitutes a number which forms the statistical answers, exactly as in any worldwide statistic.

Always the led wall, at other times it also offers thematic coloured backgrounds appropriate to the moment, as in the case of the Christmas special in which it is possible to reproduce the typical colours and symbols of the holidays". 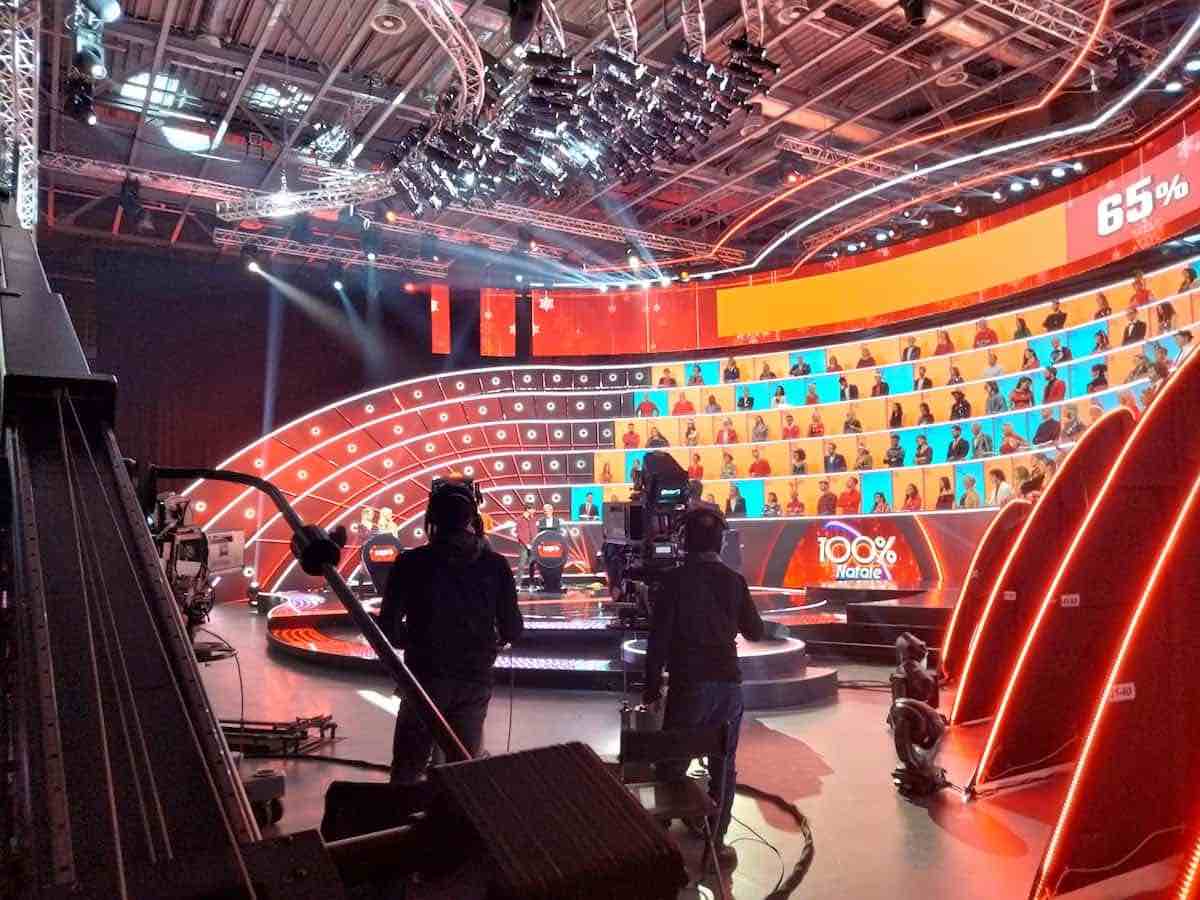 11 cameras were hired for filming, one of which is positioned on a dolly trolley for moving images which offers a total shot, shot from bottom to top.

Thus the overall perspective manages to restore the dynamics of the scenography in all its grandeur.

A side-shot jimmy-jib also helps describe the emphasis of the game; this time, with movements from above, it offers contrasting images concerning the total and helps to create the idea of the height of the beautiful set.

The other cameras are on the sides of the stage and alternate between proposing general totals, close-ups, and double-figure shots, both towards the presenter and the expert, and towards the two pairs of competitors.

The entire setup in the shooting studio is made with broadcast-type cameras, manned by an operator.

The direction is pre-fitted, and dedicated by the production centre to Studio 5. 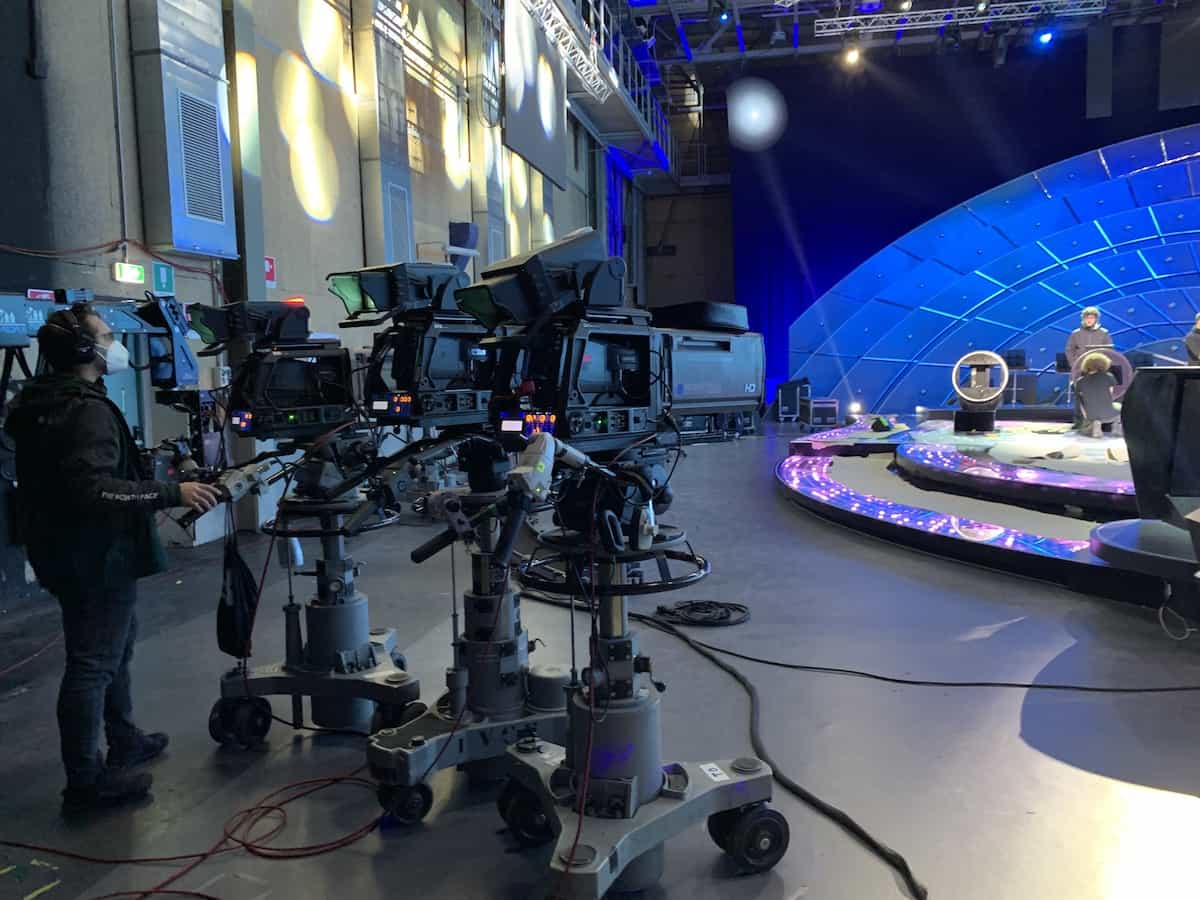 “Banijay dedicated several months to put this show and the original format together, especially for the creative ideation part.

The team had to interface with the producers and the director to understand how a structure capable of enhancing the format should be created and then, in fact, once the right decisions had been taken, the staging continued and was completed in a month and a half".

The creative part is, as usual, entirely in the hands of Banijay, while the realization was completed by 3zero2 Studios.

The staff involved in this adventure varies between 40 and 45 employees.

It was necessary to create something self-supporting and in total safety, managing scenography, distances, electrical systems and all that was useful: the overall feasibility of the scenographic project to adapt to the studio spaces was no small feat.

The scenography usually takes place on the short side of the studio and thus the public can be concentrated in lines arranged along the entire length of the parterre; in this case, however, given the absence of the public and the presence of many people, the installation on the long side was chosen.

The only difficulty was finding the 100 who intervene in each episode of which at least 80 are recurring, with complexities related to the pandemic, travel and origins from all over Italy.

Age ranges, geographical origin and gender are decisive in this game and the other variables to be considered in the choice of the representative sample are also fundamental.

“100% Italia” is divided into two tranches, with episodes broadcast until 23 December covering the prime time slot. The Christmas special aired during the holidays closes the 2022 editions, then the new season resumes on 9 January 2023 and will be on air until June with another 96 episodes. 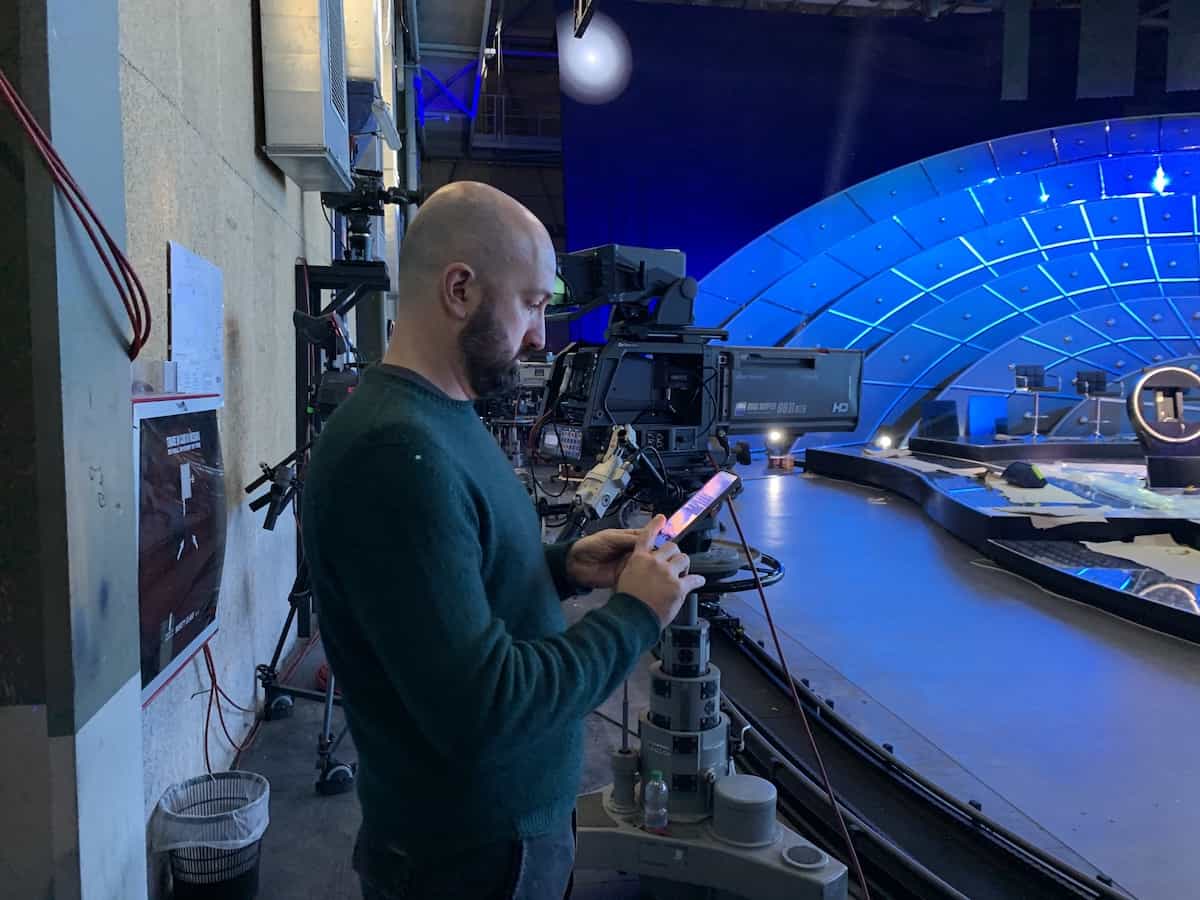 “The collaboration between Banijay and 3zero2 Studios has been going on for many years, starting in 2010.

Then more recently a partnership has also been developed with "Guess my age" and many other programs that have been made in these spaces.

These studios are an optimal structure for our formats, for the size of the filming areas, for the technologies and skills made available, which are of the highest level.

The convenience of the location and the availability of many access routes are also ideal for us.

Given the location of the studios in the centre of Milan, close to the historic centre, everything is very convenient for both staff and VIPs: it is a strategic position for us".