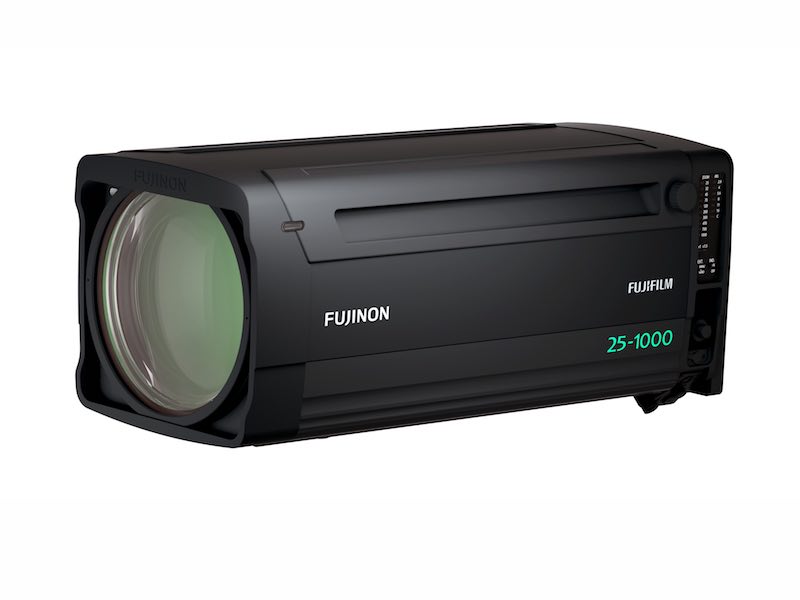 FUJIFILM and FUJINON lenses such as the new HZK25-1000mm are distributed in Italy by CVE, Communication Video Engineering.

The HZK25-1000mm is a box-type broadcast zoom lens in the dual format, supporting two types of large image sensors. It can be mounted on cameras equipped with the Super 35mm sensor or the even larger sensor equivalent to 35mm full frame*2. The lens achieves optical performance which exceeds 4K. It also facilitates the use of cinema cameras which is becoming increasingly common in the broadcast industry, offering cinematic visual expressions such as shallow depth-of-field for beautiful bokeh in live coverage of sporting events and music concerts. The HZK25-1000mm is due to be released in the spring of 2023.

Fujifilm will be showcasing the HZK25-1000mm in the “InterBEE 2022” international broadcasting equipment exhibition at Makuhari Messe (Chiba Prefecture, Japan) from November 16 to 18, 2022.

Today, in the broadcast industry, cinema cameras equipped with a sensor larger than the industry’s mainstream sensor*3 are increasingly used in live coverage of sporting events and music concerts, amidst the growing needs for immersive cinematic expressions involving the use of bokeh and high dynamic range. However, cinema camera lenses are optimized for shooting movies and TV commercials, and therefore have a smaller zoom magnification ratio than that of broadcast lenses. They also require a specialist in focus operations, which is uncommon in the broadcast industry. For these reasons, there has been a demand for a high-magnification zoom that supports a large sensor and can be operated in the same way as box-type broadcast lenses.

The new HZK25-1000mm is a broadcast zoom lens that uses optical technology, nurtured over many years, to deliver the world’s highest 40x zoom and the world’s longest focal length of 1000mm. It is designed in the dual format, supporting two types of large sensors. The lens normally works with the Super 35mm sensor, and also supports a sensor equivalent to 35mm full frame by way of activating the built-in expander*4 to expand the image circle by 1.5 times. It offers the added benefit of maintaining the same angle of view in both sensors.

On the wide-angle side, the lens provides F2.8 aperture, enabling cinematic visual expressions with shallow depth-of-field and resulting beautiful bokeh. The use of large-diameter aspherical lens and fluorite lens*5 controls various forms of aberration thoroughly to achieve optical performance which exceeds 4K. The lens maintains the operation of broadcast lenses involving zoom demand and focus demand even when mounted on a cinema camera. It can also be used with a variety of existing accessories*6. Furthermore, the lens features an image-stabilization mechanism based on Fujifilm’s unique “ceramic ball roller” system to accurately compensate for on-set vibrations and wind-induced movements for operation stability. 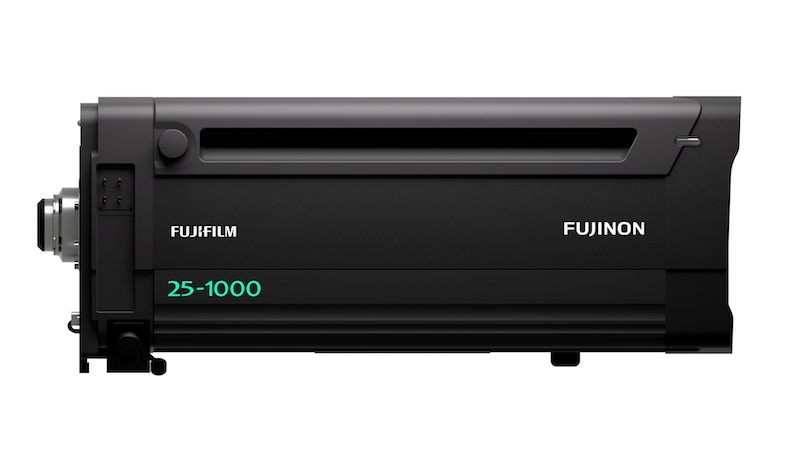 Following many years of developing and supplying broadcast lenses that address broadcast camera operators’ refined needs, Fujifilm became the first in the world to release a 4K-compatible broadcast lens in 2015. The company has since established a lineup of 8K-compatible broadcast lenses to lead the industry in raising video image quality. In the cinema industry, Fujifilm began building its lineup of cinema camera lenses in 2009 with the launch of the HK Series. Of five lens series currently on offer, the Premista Series of cinema camera zoom lenses compatible with large-format sensors*7 is embraced by frontline producers of movies and TV commercials due to its superior image resolution and advanced operability. Fujifilm will continue to develop and supply high-performance lenses and accessories that facilitate their easy operations, thereby catering to the diversifying needs of frontline video professionals.

*1 Among box-type broadcast zoom lenses compatible with a sensor larger than the Super 35mm, as of October 19, 2022 according to Fujifilm data.

*4 The expander can expand the image circle and extend the focal length to the telephoto side.

*5 Lens element made of fluorite, which has a characteristically small wavelength dispersion in light refractive indices; It enables optical design with minimal chromatic aberration.

*7 Image sensor that is larger than the mainstream formats of cinema cameras: super 35mm sensor and 35mm full frame sensor. 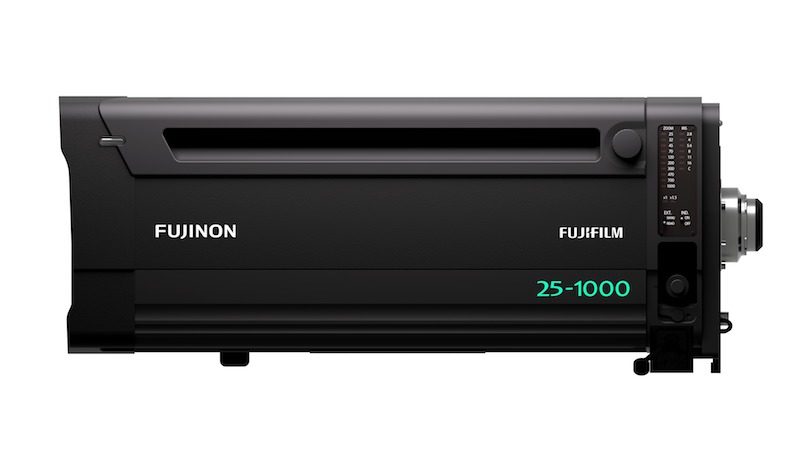 The broadcast lens is developed with optical technology nurtured over many years. It delivers the world’s highest 40x zoom covering from 25mm in wide angle to the world’s longest 1000m in ultra-telephoto.

The use of the built-in expander shifts the focal length by 1.5 times to 37.5mm-1500mm, allowing users to capture a far-away subject in the size as intended.

The dual format lens is compatible with two large sensors that are mainstream among cinema cameras. The lens normally works with the Super 35mm sensor, and also supports a sensor equivalent to 35mm full frame by activating the built-in expander to expand the image circle by 1.5 times.

When mounted on a camera equipped with a sensor equivalent to 35mm full frame, the lens delivers its maximum optical performance while maintaining the same angle of view as that of the Super 35mm sensor.

With the use of large-diameter aspherical elements and fluorite elements, polished precisely, various forms of aberration are controlled thoroughly to achieve optical performance which exceeds 4K. Ghosting, lens flair and color bleeding are also suppressed to deliver natural yet high-definition footage.

The lens has the maximum aperture of F2.8 on the wide-angle end despite being a high magnification lens that supports a large sensor. This enables filming in low-light conditions, such as an indoor concert.

The optical design application “FOCUS,” developed by Fujifilm, has been used to simulate how the background is rendered out of focus. Out-of-focus areas were separated into several layers to examine bokeh textures to achieve bokeh that naturally goes out-of-focus from the focal plane into the background. This produces the cinematic expression which makes the subject stand out.

The lens is equipped with an image stabilization mechanism based on Fujifilm’s unique “ceramic ball roller system”. It not only provides advanced image stabilization against on-set vibrations and wind-induced movements, but also controls swing-back to facilitate stable filming.

The lens can be used in the same style as broadcast lenses involving zoom demand and focus demand while being mounted on a cinema camera. It can also be used with existing accessories designed for box-type broadcast FUJINON lenses.

“A first official appearance of the HZK25-1000mm will be in Japan in November and the next will be at NAB in Las Vegas.

We are also planning a presentation workshop of one of the first demo units in Italy, as soon as we are ready we will communicate the details, at the latest immediately after the NAB.

FUJIFILM Fujinon HZK25-1000mm is a niche product that will attract attention because it will simultaneously shake up two compartments, namely broadcast and digital cinema.

It is a product that conveys all optical experience up to 8K by FUJIFILM, enclosing the best of technology dedicated to the broadcast, sport and cinema sectors.