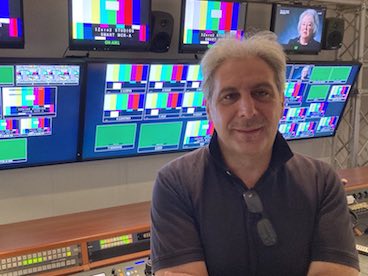 The Turin match vs Roma, held in Turin, was also broadcast in simulcast with other HD-SDR feeds.

This event was organized by Global Production, a television production service part of the international Euro Media Group.

HDR productions have been made since 2017; however native HDR is anything but, where all sources are native in HDR 2020 with a very different dynamic range compared to the converted SDR signal.

The typical complication of a standard A football production in Italy involves the use of a large number of sources - even OBVan external - which necessarily have to be updated to native HDR, because the signal entering the mixer must already be native HDR.

This goal was reached after a series of tests carried out during the last season and after countless discussions aimed at finding a common path for all the actors involved, self-producers, major television services, broadcasters and clubs, including Juventus, Roma, Infront, SKY, Lega Calcio, etc.

In reality, an HDR live broadcast in Italy had never been done, because the technical problems to be overcome are far from trivial.

The construction of the new workflow is by Eng. Renato Mancini - CTO of Global Production - who discussed with SKY and Lega Calcio on how to concretely carry out the entire production process. 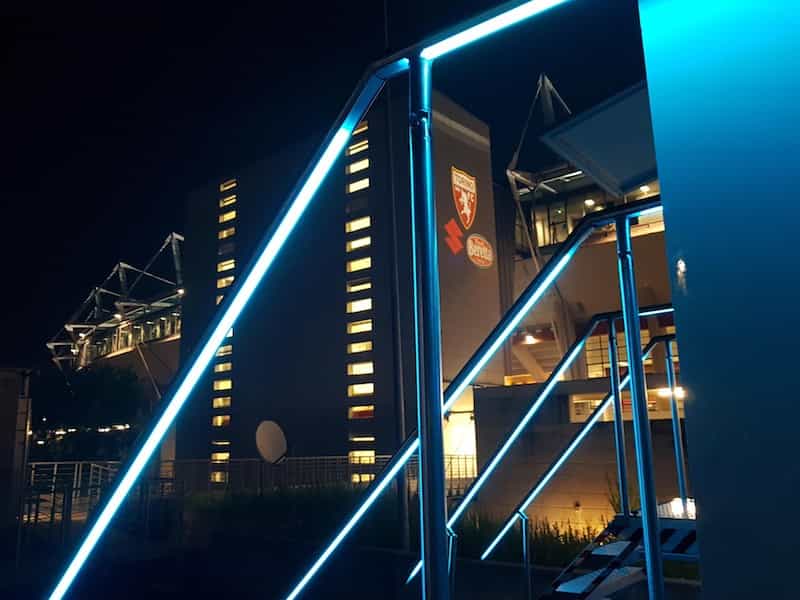 “In Italy there is no school and there is no experience, especially in Serie A, an environment where everything is very delicate, on which all eyes are focused, and it is impossible to practice live.

The difficulty is twofold, it is not enough to create a technically perfect signal in very high definition UHD-HDR, but it is essential to guarantee quality even on the very popular lower format, HD-SDR.

This is done in downconversion from HD HDR and requires a whole series of calibrations which, if they are not perfect due to inexperience, penalize the result a lot".

Global Production, starting from January 2020, in addition to investing heavily on the essential changes on one of its flagship mobile vehicles - OB8 - adding a huge amount of conversion and color mapping resources, has had and wanted to invest a lot also in human resources.

“The problem arises from the fact that HDR is not linear and in the conversion it is not enough to insert a factor that remains constant throughout the range.

And, above all, to create serious problems is the range of brightness of the cameras, therefore the iris control.

If we were to work with apertures in the typical SDR range, nothing would be seen in the simulcast in HDR.

Furthermore, the various vendors such as Grass Valley and Sony approach the problem from different points of view, given the complexity of the thing.

It was also necessary to implement a new professional, "HDR supervisor", very prepared and specialized, who, from a dedicated workstation, has a complete view of both the SHR and the HDR.

It works in the HDR range of the cameras, in the upper part of the signal, in the super white (over 100% in the SDR), and in the color zone to constantly check both signals.

In reality, in the Serie A there are six outputs that must constantly realign with experience and sensitivity, returning an artistic range, managing the 16 cameras in native 4K-HDR with incredible nuances and details in color, coupled with greater brightness." 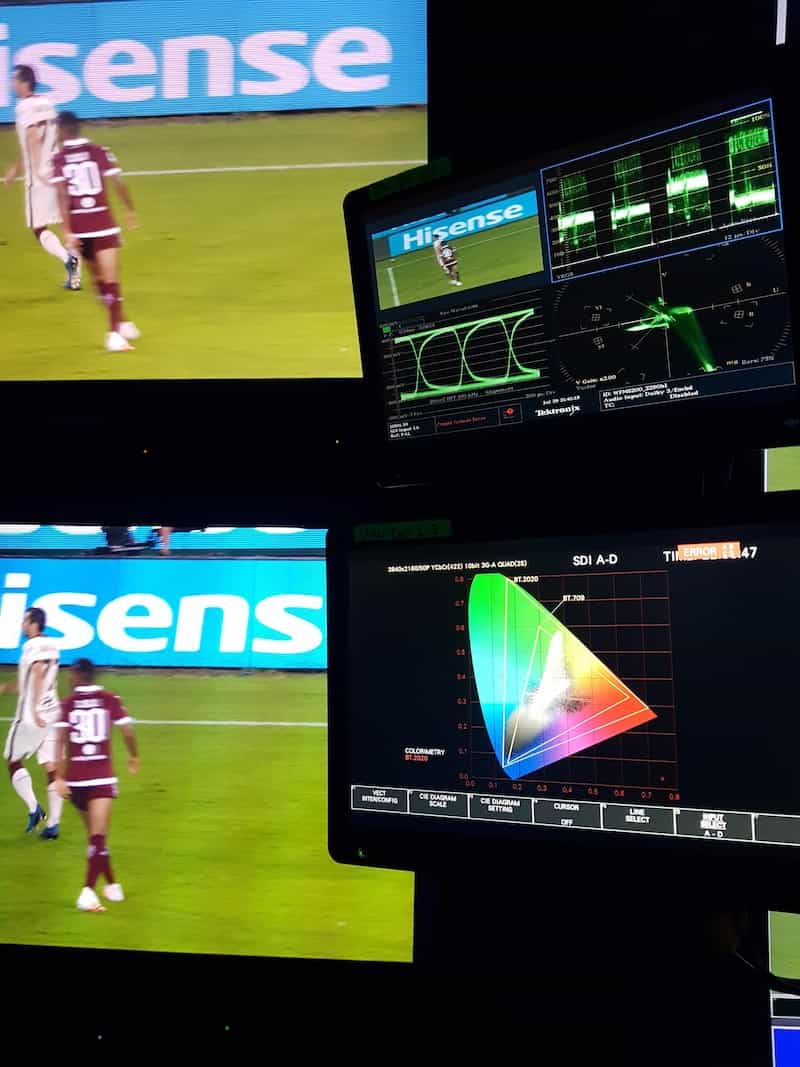 This courageous path made it possible to compose a sort of best practice, a workflow prototype that outlines how to handle the signals and that will be reused by the technical structure in all future Serie A matches.

This workflow was developed by Global Production in cooperation with the technical management of SKY Italia and delivered to Lega Calcio, Infront, to the tv production services, and to all the self-producers operating in Serie A.

“We have to thank very much SKY Italy who wanted to believe in the project and invest with great availability of means of production and technology at different levels, even in tests, with constant checks and feedback from the central plant”.

All native sources in 4K UHD-HDR

Netco Sports, another subsidiary of the EMG group in Italy, and ISG, also actively participated in this event-experiment by producing all the graphics and virtual mats natively in 4K UHD-HDR, perfectly controlling colors, positioning, and white saturations.

All the graphic sections had to undergo re-elaborations and adaptations, constituting an important test bench that allowed, even here, to create a basic setup that will be re-applied on all future games.

“The internal OB8 workflow is different from the usual: a double simultaneous management of the iris apertures is required and a new HDR master control setup manages all the HDR cameras and also the controls that operate for the HD-SDR.

There are other systems of other vendors that try to manage this double work by applying offsets for the HDR part, but it is common opinion that these offsets are still to be built, to date, due to the continuous variable exposure of the necessary calibrations.

GrassValley devices used by Global Production on the OB8 allow to apply all the necessary changes live. 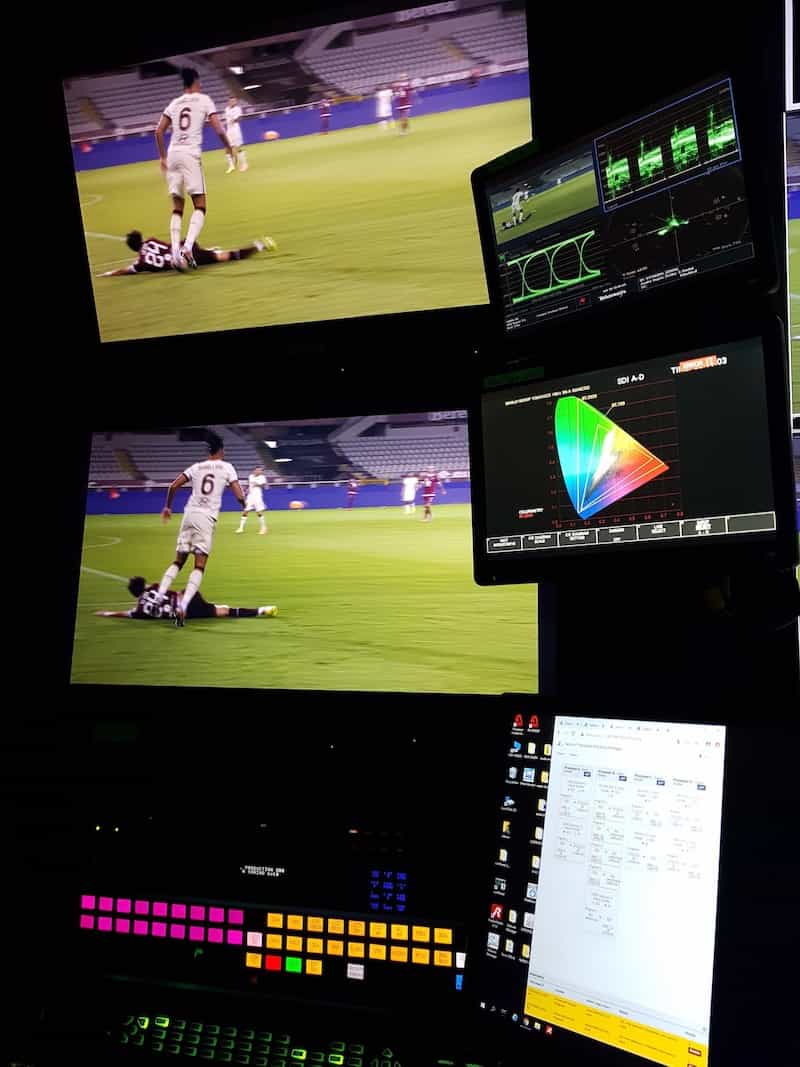 The technologies on Italian vans are different and the workflow can vary.

The CTOs of the various tv producer services met and launched a common standard with SKY and Lega Calcio, but the only ones to have updated according to these standards were Global Production with huge investments.

The event confirmed that native HDR can be produced excellently while preserving the HD-SDR signal that still generates the largest audience numbers.

The new championship will be compliant with the new 4K UHD-HDR television sets, the SKY Q receiver, with advertising and promotion, and clearing the games from next year, where the difference in the images will be really visible.

From next year, anyone who goes to work for Lega Calcio will have to respect this standard according to a sort of "Sky approved" seal."