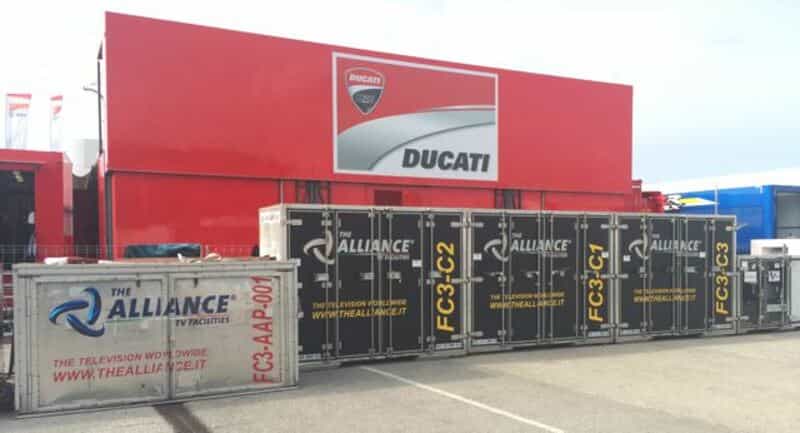 Flight case units, FC1-2-3-4 by Italian “The Alliance” were born for mobile production in television coverage. In the latest few months they have been revised and completed updated to face new adventures in television production, especially in sports based programs -as the Universiadi in Kazakistan- but certainly not only that.

Many are the international sports productions which see the Alliance at the forefront.
One reason for this choice is that this television production company derives its strength from the merger of three very reputable companies, Global Production, One TV and SBP, which -by the way - have joined forces to "do the alliance."

Andrea Gianolli CEO and CTO of One TV highlights: "The Alliance now has 4 flight cases units fully operational, complete galleries each that results from each subsidiary.

The Unit FC1, usually takes care of creating the filming of the track feed for MotoGP. All the footage we see at home from the tracks are shot from the cameras in each MotoGP circuit, images created for Dorna as a broadcaster feed by The Alliance using the FC1.
Also for the MotoGP, unit FC3 creates the unilateral integration of images required by SKY Italy, in the wake of the multi-year production contract. In this production are also produced the images taken by radio cameras for interviews with pilots, the filming in studio, when present, and also the NLE editing.
The flight case Unit FC2 creates, again for Dorna, the Superbike feed track and then all the shots on the various race circuits are produced from a complete gallery that is now also an integral part of The Alliance.
The Unit FC4 is slightly smaller and is calibrated for some tv productions, indoor type, such as the Costanzo Show, but also for sporting events with lower requirements.
The FC1 2 and 3 units have recently been used for the production of the Winter Universiadi held in Almaty from January 29th to February 8th, 2017: As soon as motoring 2016 productions were completed, they were gathered in Professional Show (well known system integrator) hangar, the on purpose technical area, and improved together with One TV on the new additions and enhancements to address the challenges to produce the competitions of the Universiade held in Kazakhstan.
It was a big production that was realized in three different locations that corresponded to five different venues (places of filming where the races are held).
In the village of Alatau where they carried out the Nordic skiing and biathlon, worked two different recording studios with many filmmakers, both managed and controlled by the Technical Unit of the flight case FC1 for a total of 30 cameras employed: GVG LDX80 / 86 with 22 long lenses (72x - 86x - 101x), 2 HI-Speed cameras LDX86n and 36 channels replay.
Also at the resort of Shymbulak were two independent control rooms that were operating simultaneously and were headed by a single technical management, dedicated to traditional skiing (giant and super giant slalom) and the other dedicated to the disciplines Slope Style - Ski cross - cross Snowboard - Moguls - parralel Ski and Snowboard. Here the cameras used were 26 GVG LDX80 / 86, 2 hi-speed LDK 8300 and replay with 30 channels.
At Sunkar for trampoline jumping the third Mobile Flight case unit was operating - the smallest FC3 - but which has still managed a compound with 14 cameras LDX80 GVG, 1 Hi-Speed LDK8300, 1 Pole-cam-1 Jimmy Jib, 2 ice-cam Come & Go and 22 channels replay.
So everything in the World Universiadi Games in Almaty taking place outside of stadiums and arenas, was tv produced by The Alliance using the flight cases originally devoted to sports motoring and which now have been greatly improved for both in the increased production capacity but also for the quality and reliability of the technologies employed.