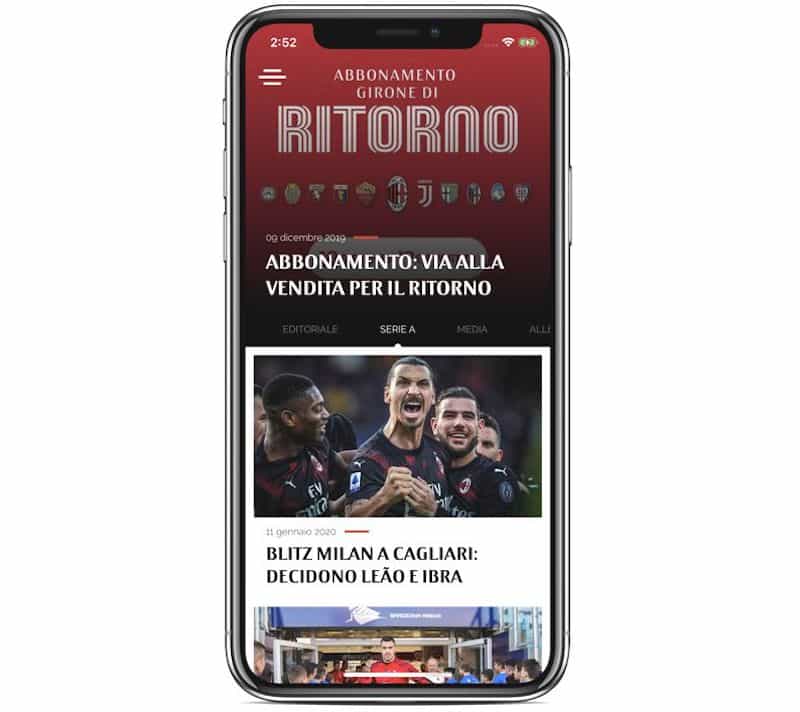 The development of Milan's strategies for the "digital world” starts from the decision to implement new integrated platforms with different purposes and subsequently renew the website www.acmilan.com.

The club has decided to undertake the process of creation, development and publishing of content destined for digital channels by putting in place a structured plan. The plan required a careful analysis of market benchmarking, project planning and, among many objectives, that of achieving a very high standard of effectiveness and efficiency in fan engagement and communication processes.

Netco Sports Italy has been designated by the club as technological partner for the entire project, which, from conception to issuing, took about six months, then in August 2019 the official AC Milan app was released.

The product is characterised by a striking graphic design accompanied by a considerable amount of constantly updated information from the calendar, to the special content, statistics, notifications, results, ranking and much more.

In addition, the club app was designed to facilitate the management of merchandising and ticketing activities totally integrated with the web platform, this to the benefit of the user who is guaranteed access to all the offers and services of the sports club, with access to functions and simple and immediate usability.

The Chief Revenue Officer of Milan, Casper Stylsvig, tells us “Our app is designed to allow fans direct access to all of Milan's editorial content, news, videos, photo galleries and to have a continuous update of all sports data, such as the calendar of the first team, the results, the rankings and many other insights available for each game".

The app was born primarily as a "main destination" for all fans, to make them feel part of a community united by the same passion.

The next step in the development of the app, which will be implemented shortly, provides the possibility for fans to interact even more, to speak in community and play in interactive live mode.

Clément Lefort and Francesco Donato are the project managers of Netco Sports. Clémont says: "We wanted to offer something aesthetically appealing, with a balance between editorial content, statistics and functionality".

Netco Sports is certainly at the forefront in the creation of digital solutions for the world of sport and its Italian subsidiary Netco Sports Italy -part of the international group Euro Media Group- in addition to dealing with television production is the most important provider of graphics services in real time for the major championships and sporting events taking place on the Italian territory.

For the creation of the app of the red and black club, Netco Sports involved staff on the Italian territory for the development, design, testing and quality control, as well as professionals who are stationed at the international development centre.

Among the various characteristics and functions of the project, the capitalisation of the teams precious statistical data is fundamental. These have been organised and optimised for use in a mobile environment.

The app of the Club Rossonero is designed to project users into the world of Milan society and, once registered, you enter the dimension of the team straight at the heart through a timeline with direct access to the latest news, published videos, personal posts of the players and related photo galleries.

The fan can vote to elect the "man of the match" MVP (most valuable player), while a special area known as "MyMilan" allowing them to create and manage a personal profile and easily associate the "Rossonero Heart" card to buy, for example, tickets to attend the matches and anything else available for the associated fan.

Lamberto Siega, Marketing & Digital Director of the Club adds, "The App has a dual strategic role. First of all, it represents an important channel of interaction with the fans, bringing them closer to the Club and its values.

At the same time, the app allows you to collect a lot of information about the user, which in turn allows for better audience profiling, editorial and commercial content (tickets, merchandising, sponsor offers ...) are thus personalised, generating economic value for the club and satisfaction for the fan.

The critical success factor is therefore the ability to feed this virtuous circle of big data, constantly developing and introducing new features and content aimed at increasing fan awareness".

In Italy, the Serie A matches are broadcast live by SKY Italia and Dazn, who own the rights and the Milan app was also designed to function as a real "second screen" which includes information in real time, as well as a personalised audio commentary through the historic voice of the Rossoneri colors, Mauro Suma.

In addition, the space dedicated to the women's team and the youth sector is complete and always updated and from this it is possible to follow the company's press conferences and the presentations of the players, for a parallel use to the media mainstream of traditional pay TV.

Finally, it is important to highlight that one of the pillars of the solution design was the development of functions that were closely linked to the sports club's campaign to encourage the best "fan engagement" strategy, to achieve maximum user involvement and loyalty. For this reason, the structure of the app was designed as modular and able to grow and be transformed according to future needs.

Therefore, the flexibility of use of the technological solution will allow implementation and release of new functionalities and features in order to involve more and more users, strengthening the sense of community and belonging, fed by the intrinsic social interaction functions of the product.