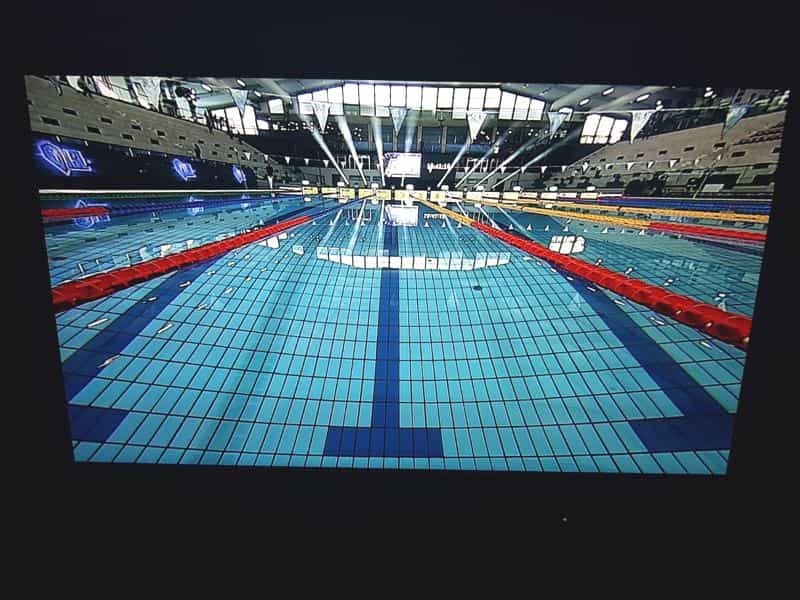 A great swimming show produced by Global Production for EMG.

Naples hosted the television production of a new format invented by the American IMG for the International Swimming League.

The event took place from 10th to 13th October at the Felice Scandone pool, where four international teams faced each other in mixed swimming competitions in a 25 metre short pool.

The format created is optimized for TV and everything is studied to create very spectacular television footage, with great use of virtual graphics, underwater cameras, aerial shots, dollies and special points of view.

Euro Media Group is the technical partner group that supports IMG in all European events of which the first one stopped in Naples, creating this new initiative in the world of professional swimming.

They started from the concept that swimming receives a very small fraction of media attention and budgets when compared to other sports.

Considering that swimming athletes receive very little money in their careers when compared with other sports professionals, ISL decided to change the cards on the table.

So they designed and launched this television format that puts the world's best swimmers in the water, creates mixed teams and leads them to clash in different cities around the world.

This allowed creation of important media events, broadcast by channels all over the world, such as Eurosport for Europe, which together add up to a huge audience of over 10 million viewers expected over a 5-year period.

The idea is simple: to attract many sponsors and to redistribute in a fair way the proceeds of this great swimming circus between the organisation and the athletes, the coaches, the clubs, the federations.

The official planning points are the competition between teams with regular seasons, and then financial incentives, the involvement of the best world athletes, gender equality, teams composed of 12 men and 12 women, no tolerance for doping, creating a new category for swimming professionals, where the athlete is at the centre of a great sports show.

This beautiful project required first-rate technical partners and in fact it was chosen for the firepower of the pan-European Euro Media Group which, for the Italian leg, relied on some of its trump cards, these being CTV Outside Broadcasts, British and Italian Global Production subsidiaries for the entire television production of the event, giving two hours and 30 minutes of live broadcast for two days.

Renato Mancini, Global Chief Technology Officer, explains, "The production team of 35 people provided two days of setup, one of tests and two of live competition, with international broadcast on Eurosport in HD 1080i @ 50Hz for European and worldwide re-transmission.

In action we committed the OB8 mobile vehicle, our 4K HDR flagship that manages up to 30 cameras, as well as a complex mix of "specialty cams" provided by the "British cousins" Aerial Camera Systems, also of the EMG Group.

Among these, a RobyCam 3D cable cam suspended with cables and equipped with sensors placed on the camera and on the roof of the "palazzetto" to integrate the virtual footage, 16 cameras in total, 4 of which underwater, 3 PTZ and 1 Polecam SuperLoupe Mini (John Gillan) and SuperLoupe (DVS) with operator and relative diving suit.

An ACS Hero Cam (EMG) was placed near the starting blocks along with two mini POVs and the PTZ underwater cameras were remotely operated on Furio Track tracks.

Then we used two radio-cameras with EI Towers (Industrial Electronics) links, one of which was a steadicam, an Ultra Motion from Digital Vidéo Sud (EMG subsidiary), and other "normal" Grass Valley LDK 86N with 80x9 lenses, shoulder operated, on tripods and on rail tracks and for ENG."

The show within the show

The event is very sporty in the sense of competition, and less commented than usual from a journalistic point of view. Furthermore, the aspect of "event in the event" was taken care of, that is, the public in the pool were entertained with a very accurate scene from lighting with motorized heads, an led wall and also with amplification and DJ music between the various rounds.

The whole event was very spectacular and unfolded with carefully planned timetables in pure "American television style", favouring the strategic inclusion of sponsors and with great use of virtual live graphics.
The format derived from the first competition in the United States made the first stop in Naples and then will continue onto Budapest and London.

Renato Mancini continues: "We tried to solve some "problems of youth" of the format, like the management of a very tight production rundown, without downtime and with a lot of graphics, and the positioning of the cameras in an environment like the pool that was, of course, different and smaller than Indianapolis's.

We had to find the right solutions to respect the format, including every shot angle and trying to be faithful to the original was not easy as there were many challenges to consider.

Even audio was important and in addition to the standard set-ups for stereo footage and international commentary in English, we used hyper cardioid microphones for the two commentators and a guest in the commentary box near the pool. Moreover, the team captains were microphoned and connected, thanks to radio intercoms, with the production coordinator on board the vehicle.

The vehicle, OB8, absolutely oversized for the event, was chosen above all for the great availability of space on board, and the ability to solve unexpected problems.

The last interesting technical note: in this event we decided to try a new image corrector by Alpha Eye with great success, which allows us to correct the optical distortions derived from the shots taken by underwater cameras.

These images are wide-angle, almost fish-eye lens, while, thanks to the processor that operates downstream in SDI format and with a delay of only one frame, the shots become usable as normal contribution images.

In practice, the processor, thanks to some presets, allows you to transform a "technical camera" into an additional camera with correct images and better rendering."