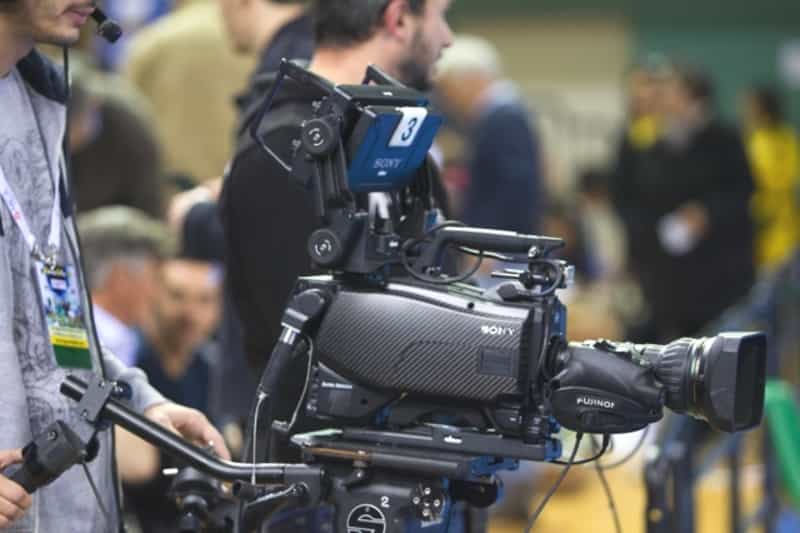 SVG idea was clear: a professional networking series of panels, that is an exchange of experiences and expertise amongst technological innovations of sport broadcast. Sky headquarter in Milan hosted this first panel of discussion on May 25th 2016.

The mission is to give support to the broadcast community through the dialogue of professionals in these adjacent areas, so that the experience of the "group" is much higher the simple sum of the contributions of the individuals.
In the meeting, moderated by Emanuela Barasco, and Riccardo Botta from Sky Italia, we heard the voices of Tiziano Mantovani Sky Italia, Massimo Bertolotti Sky Italia, Fabrizio Preti AS Roma, Chafik Ould Mhalla, Juventus FC, Carlo Struzzi Videoprogetti, Stefano Mazzon Professional Show, Massimiliano Anchise, 3Zero2, Andrea Buonomo Cinevideo, Andrea Gianolli One Tv, and several others in the debate representing the huge community of broadcasters, content providers, vendors, leagues, system integrators, partners and competitors.
What follows are just some of the many concepts that have emerged from this community meeting.

In general
We are experiencing a period of really driving technological developments in which the landscape changes every day. The growth is no longer linear but exponential, as well as the computational power. We must ride the change to be able to produce the best television contents and not only.
The idea of Networking, arises from the consideration that the competitors do not speak to each others and don't share "best practices", to achieve better results. So building a network and sharing a group experience, including system integrators, service providers, TV facilities, producers, broadcasters, teams, leagues, publishers, webcasters, and consumers, we generate some important guidelines for the whole industry.

A good example of best practice comes from Sky.
In July 2014 Sky Europe was born, bringing together the three structures Sky Italy Germany and UK. The first opportunity to work together was the Formula 1, a project that last more than a year, which is an example of optimization and sharing of skills and knowledge of the three teams. It collects the best of productions suites. Sky takes around the F1 circuits 7 production hubs. 4 are fixed and expandable and 3 are the separate control rooms. The tech hub part consists of electronic servers, arrays, RF receivers. In practice, it is a sort of MCR composed of 4 hubs, while the other 3 are different control rooms for Sky Italy, Sky UK and Sky Germany.
Unlike last year, in 2016 a single feed was produced for all three countries and then each customized with replays, graphics and comments. A central core records all on board cameras and all programs on a 528 TB single server. Here it is also handled all the historical video archives since 1992 to present, so even without a connection they have all the signals and what is necessary for the transmission.
The 7 flight cases are interconnected with copper and fiber; then a system with 8 true diversity receivers with conversion E/O is used to receive RF cameras and wireless microphones. A UPS battery covers emergencies up to 12 hours for the cameras and around thirty microphones on the circuit. The various sections, replays, video mixer, and audio mixer quickly are assembled in around 40/50 minutes. The flights are arranged, opened, wired and fibers pulled where needed in the circuit to connect with the RF.
A single program from FOM enters a hybrid matrix, along with the commentator cams and the interview cameras. The hybrid matrix 288x512, collects fiber signals, SDI, Madi, Ravenna and analog audio. Then 60 EVS channels are useful for recording and centralized on a server.
From there signals are routed also to the 4 editing suites with Final Cut Pro and all the material is then ingested at 100 MB in HEVC.
The three control rooms signals travel back into the matrix and from there the signal is sent to Tata for Europe with diffusion via dual fiber.
Two signals are arriving in London and two in Milan (two interconnected sites), and one in Germany as main and backup. Three are the unilateral Sky signals, plus all the onboard cameras, the program and the service signals are sent back on tata fiber.

The challenge of 4K
Starting from the definition of 4K or Ultra HD (and avoiding the confusion of the various names, as well as the various technical standards), the goal is to better represent reality through television. Since the receiver is always a person and the "stress" admissible by our brains is limited, it is important to ask ourselves where real improvements consists in 4K. That is, the technique must take into account the objective and subjective reality: investing a lot on colors and definition is important as well as understanding what can the actual response of the viewer could be.
Talking of innovation, the relationship between HD and 4K is quite different, actually HD was more a revolution since it brought in our homes flat and large screens; then the revolution was not only in video quality. Today 4K hardly manages to attract the same attention.
It is important to consider the relationship between the screen size and resolution: you need a big screen or a narrow viewing distance to appreciate the real differences.
It is not the same effect as ten years ago with HD. And it is important not to waste the opportunity to launch a new product.
Sky Italy considers 4K not only the launch of a new technology but something on which it is necessary to build a new experience for the customer: the appeal is to be much higher than now, mature, sufficiently stable, continuous and commendable.
So at the moment there is no precise 4K launch date for the current year. Actually the increase of resolution can generate value and also increasing the frame rate at 50 fps for the production is not enough; the benefits are there, but a standard is necessary.

HDR
Meanwhile Sky is focussing a lot on HDR since the launch of a 4K service is also delayed by the three largest display suppliers (Sony, Samsung, LG) who disagree even on the standard name: Ultra HD, UHD, 4K.
HDR is currently still another element of disagreement. There are many proposals, "basic" and "evolved"; a few are standard, but actually there is one (Blueray Association) PQ (Blueray UHD) which seems more interesting, and this also generates instability in the perception of the 4K concept at the end user. Besides many TV sets already on the market are not compatible to the HDR.
The "color element" is the spring that could trigger the jump beyond HD, the added value to quality. The HDR tries to work on the brightness and the correct colorimetry and light values to give more strength to 4K contents. HDR extends management of the brightness curve and colorimetry but the final effect depends very much on the TVs still present in our houses. Today we must also manage the quality perceived in the environment, because there are many variables (it requires special lighting conditions).
The HDR signal allows you to perceive immediately the improved color management.
4K prompts to act on all the points of the productive, distributive end delivery chain and the HDR still lacks a few steps.
How to handle it and how to propose it to the end user are still the questions, as well as backward compatibility that requires constraints and compromises.
The tests continue, but still some pieces are missing.
There are some issues, and among them how to make vision uniform regardless of tv existing among users, how to manage the transition between two different HDR contents, the eco-compatibility between the different HDR systems are still to be studied: the cooperation among all involved parties in the game becomes essential to create a minimum of interoperability and maybe the same line of thought.

For the production segment
In the production segment, today the risk of making bad investments is high, in fact, 4K now and 8K tomorrow are driving forces, but the qualitative differences appears to be inadequate in respect to the HD revolution.
The Italian landscape for 4K still seems a bit complex, there are no contents and it is difficult to store them and also to air them for the available bandwidth.
Equipment vendors point out that, despite everything, the design of new systems is now absolutely in 4K, although there are still no standards, not even in iP (though some steps have been taken).
The request for 4K only comes from abroad and the different standards are still the limits; the risk is to invest today on new equipments which will be totally obsolete or inadequate in two years.
Nonetheless some countries like UK are investing in 4k productions (BT) in several sports disciplines. RAI is engaged with 4K European Championship, the same Mediaset, but it is unknown how many people at home will be able to watch live 4K broadcasts.

"This SVG events are meant as an occasion to network for sport broadcasters and producers and the whole industry; we are trying to become a group." Riccardo Botta, Sky Italia

"At the moment there is no precise path for a 4K Sky offer. We are working on it. Lots of benefits are there but we await a standard." Massimo Bertolotti, Sky Italia

"In the production segment, the risk of wrong investments is high; actually 4K now and 8K tomorrow are just around the corner, but differences in quality seem too low in respect to what happened with HD." Andrea Buonomo, Cinevideo

"Among the many technologies the sports broadcasters carefully watch, HDR is considered a great advantage. Even if not applied to 4K there is a perceivable improvement in quality." Carlo Struzzi Videoprogetti