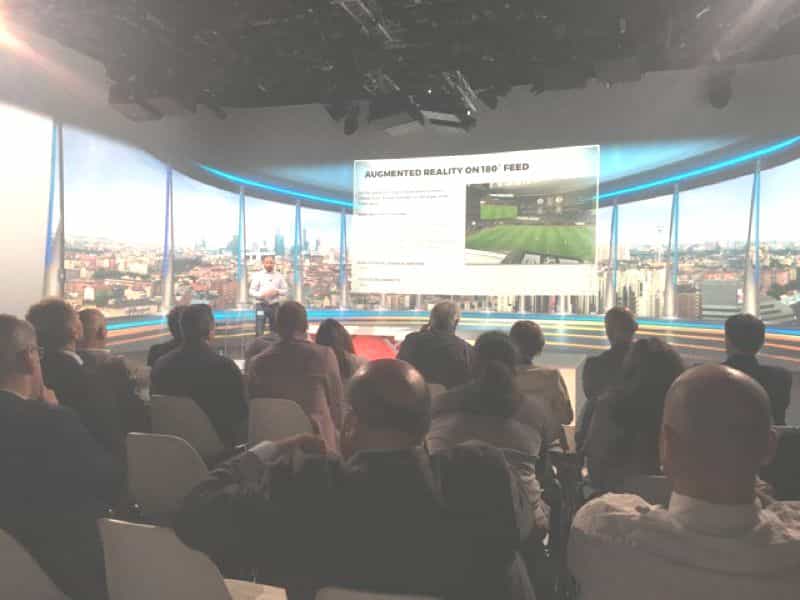 In the presence of about eighty representatives of the major Italian television production services, providers, broadcasters, specialists and research centers, there was a discussion on subjects of great interest from 2 to 6 pm.
Among these, not in order: "the new SkyQ and Multi Platform by SKY" by Massimo Bertolotti (Head of Engineering and Innovation), the "Ocean Rescue" project by Cristina Fenzi, a presentation of "Delta Tre" by Roberto Sciaretta, the "Agile Software Lab" by Carlo Romagnoli and themes even closer to the interests of SVG and on which we focus on here, as "the new study by SKY TG 24 Milan and Rome" by Riccardo Botta (Production Broadcast & Creative Director), "The remote production linked to F1" by Manuela
raschi (Head of Sport production & Operations), "the 4K in sport" by Massimo Bertolotti.

Riccardo Botta: "a virtuous circle, that is telling the News in a different way"
Riccardo Botta explained how in just 18 months the Operation migration project and the SKY TG 24 Milan and Rome technologies were implemented.
The production center becomes "the official liaison" between editorial needs "cross gender oriented" (news, sport, entertainment) with the need to tell the best stories with the best means.
The coordinated management of news 600 km away (Milan-Rome) is a seriuoos challenge; traditional way of telling news has changed and we all receive information from various media, even before the traditional tv bulletin.
Today it is essential to explain, through the support of innovative technologies, the reason for a certain event; a broadcaster is to differentiate in the offer by adding opinion, context, analysis, story telling.
The "multi-set" design of the studies underlines with stylistic elements this concept of "better story telling": therefore the need was to "reposition" the news with inclusive instruments - also using particular and involving materials such as bricks and parquet, a more welcoming desk to manage more guests and integrate Virtual and Augmented Reality.
Studio 10 in Milan symbolizes modernity and innovation and proposes a hitech setting with "floor to ceiling" images on three large video-walls consisting of one hundred 55" monitors by NEC, plus three totems.
Rome proposes a scenographic ledwall with the view of the Montecitorio façade from two reconstructed windows and images of a live camera, about forty video-wall monitors composing an "L" and a square desk to host many guests.
Everything is in 4K and the system that manages the projections is by Vizrt multiplay integrated with Mosart, equivalent to 120 Viz Engine, to manage 14 different editorial formats.
The product process remains complex with three studies that interconnect and with the remote production from Rome managed with the Mozart-based Gallery Automation System. The operation is based on 5 people, the audio mixer, the journalist, the redundant MOS operator and the production manager, a studio floor assist that controls the robotic cameras in case of issues and that microphones the guests.

Manuela Baraschi: "the success of the project: collaboration and new ideas"
"Sky, always one step ahead", bravely successfully experimented - first in a group with SKY DE and SKY UK and then as a soloist - the new model of remote production for TV production in sports.
Starting in 2015, the Group faced the F1 with 95 people on venue and huge expenses. In the 2016/17 season, sharing the editorial products, the savings were by 20% and the people involved 74.
Then with the new 2017 model of remote production, savings raised to 30% and 65 people were involved.
The last season saw Sky Italia, alone, deciding to move the direction and all the people involved from the venue to its production center in Milano Santa Giulia: director, editorial coordination, producer, EVS operators, graphic designers and editors.
Seven people are no longer physically on the F1 circuit and, without having a negative impact on the tv product, they can use all the resources of Sky production center optimized and upgraded with new multi-purpose investments.
Here are received 14 signals (the same number on venue), some direct from the circuits, some from the London Sky UK media hub (with access to the F1 archive).
Before the official debut a transmission in remote production was simulated to understand how to handle everything and especially to check the delays of the signals that frightened.
As disaster recovery, a satellite delivery was prepared with the international signal plus the signal of a personalized camera with audio, as well as a "plan B" with a simplified management in case of problems, based on seven signals, just in case.
The units that worked on the Sky Italia group project were: Engineering, the PCH structure for editing and graphics, MCR and playout, signal management, IT, human resources, procurement, and finance.

Massimo Bertolotti, "4K but only with HDR"
In 2013 Sky Italia already addressed the topic of 4K, to have a good margin of time and a view of being able to follow the customer in the best possible way, with excellent production, transmission and reception.
Today the 4K talk is associated with a new generation of set top boxes, of which "SKY Q" is the top.
This is an overall experience not only involving the video but also the information needed to return a high-level of 4K.
After the first tests in sports broadcast dated 2013, at Misano, with only 25 fps, in 2015, and even after some reflections on the chain that complements the end-to-end system together with SKY Germany, the tests and analysis of the HDR on different formats then competing, on live events, continued
Unlike other countries where the competition on 4K was already on, in Italy Sky took their time to better evaluate the whole thing, starting from the trend of televisions sets on the market to be of sufficient size to ensure the benefits of 4K and that could also support HDR.
Coming from a high quality HD broadcast, the launch of 4K had to allow the public to perceive a real difference in quality and above all in color.
The HDR for SKY Italy was the right choice because it allows a range of colors that is perceptible to the viewer (while 4K alone ...) and the yield is really superior.
The choice of "what HDR" to deliver home was problematic and HLG, even in view of a backward compatibility, was chosen not lightly.
Then it was also necessary to find the best possible way to upconvert the contents already available in 4K but not in HDR.
So many tests were spread over an appropriate time frame on the standard, on the signal chain, on metadata management, and on the logo - and the new brand - that coul mark a point of demarcation from HD to a never seen 4K experience.
This is order not to confuse viewers in a congested market of abbreviations around 4K (the 4 largest suppliers of screens have 4 different acronyms).
In practice, SKY Italia took some time before launching the 4K HDR to adapt it to the level of its reputation for quality, to ensure the best possible result on all segments, the technologies in the production chain, the availability of content, the device at home and in the meantime the high quality demand from customers on the market leavened ...