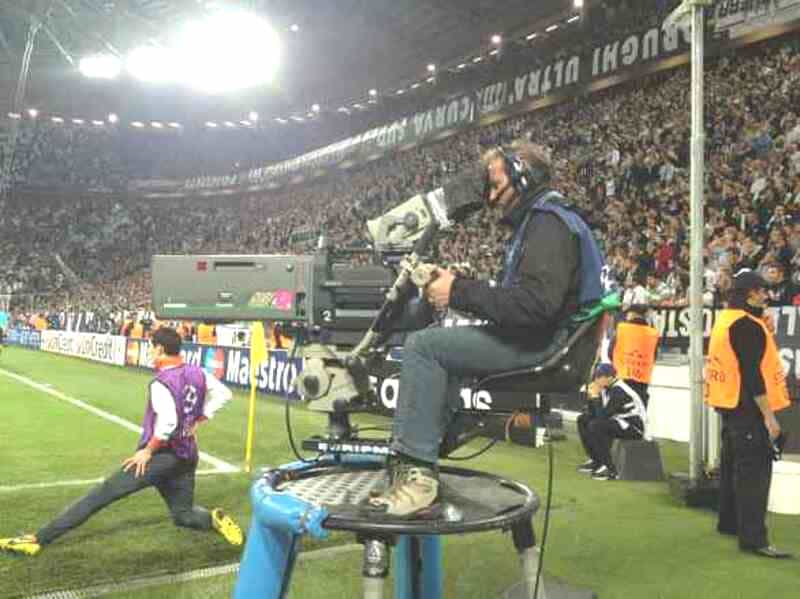 The match was held at Empoli and the event is beyond the "typical" production that is usually realized in HD.
The test was carried out in HDR in view of future broadcasts in the next season.
The match was broadcast on Sky Sports in HD and those who already own the latest SkyQ decoder could watch the game in 4K HDR.

Giovanni Lorini, Telerecord technical manager, provides us with other technical details:
"Telerecord, in charge of the event, provided a double signal in HD and in 4K HDR. The mobile vehicle sent to Empoli made all the shots in 4K HDR and from there the signals were sent on fiber optic distribution to SKY Santa Giulia broadcast center in Milan for finalization and airing."
"Also the replay equipments and the video mixer were in 4K and the output signal was converted into the one wanted by SKY, that is SLog3.
This "HDR curve" has been in use for several years for Sony cameras, cinema and high end productions. "
"The workflow was made on the video mixer in SLog3 with color space Rec 2020 and from that format "4K intermediate", with appropriate converters, we could get all the useful formats, such as 4K HLG (Hyper Log Gamma), HD SDR or others."
"All the cameras used were Sony HDC4300 with 2/3" sensors, Sony RVS8000x video mixer, and Fujinon 4K TV optics with high-performance zoom that even reached 100X. "
"The shooting layout followed the standard of the Series B with 5 cameras, with the main camera in the center of the tribune, next to the camera 2 that took care of the narrow shots, close ups, the camera 3 placed at the center field on a mobile support called "piattina" that moves together with the camera; the 4 and 5 cameras are placed on the 16 meters in the stands that deal mainly with the out of game. "
"All cameras were placed on the same side and all camera signals travel on fiber optics."
"For the audio, there were six microphones at the corners, at 16 meters."
"Another aspect not certainly common for this type of television product is that all the replay channels were in 4K natives, both for all 5 cameras and for the clean feed from which the highlights of the game were produced, so 24 recording channels were engaged."
"Telerecord on the spot decided to use the mobile unit 26, a 16-meter poised trailer that fully expanded covers six meters wide. The staff employed consisted of 5 operators to the cameras, a sound engineer, three replay operators, two camera controllers, a technical manager and two audio assistants."
"The graphic customization was realized with the same production cameras, in position 3, and the local graphics were realized in 1080P."
"The few problems that emerged are related to the presence of content not yet native to 4K HDR, such as graphics, which must be processed before use.
A high-performance Sony converter, model HDRC4000, was used at the output, operating 4 simultaneous conversions.
From the incoming 4K Slog3 double feed we could downcover the HD signals and other useful 4K formats."
"From the point of view of audiovisual language, the 4K 50P offers a lot of resolution in every frame and did not require special attention if not a great deal of attention to focus that is even more critical."
"A second problem is due to the simultaneous presence in production of 4k HDR and HD signals: the same exposure latitude can not be used. This implies an obligatory choice in favoring high lights or low lights."
The entire monitoring was in HD for the control rooms, while the reference monitor in 4K was the Sony X300 (certified by Amazon and Netflix for production in 4K) that for us has excellent brightness and a very real contrast ratio between white and black. "