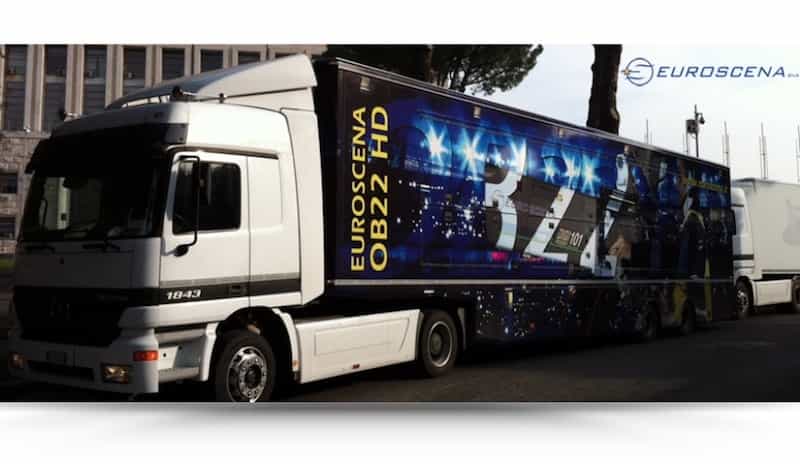 "We followed the match at the San Paolo stadium in Naples on 7th March with two of our mobile control rooms, two outside broadcast units different per size and capacity, OB22 that was responsible for creating the international host signal and OB20 which followed the national integration for Mediaset, with a total of 25 tv cameras."

So says Manuel Lombardini, 31 year old technical manager Euroscena who has had already followed five finals of the Champions. "Unit OB 22 is our top gallery, and as technical chief I decide the entire plant that deals with events like this."
"The process is always the same: the customer passes us some information on the event, Mediaset Premium deals with both the international feed and the national integration. On his requests the coordinator decides which mobile unit to send according to the tech plan and the number of cameras required. Then we also decide which "plus", are necessary to make the difference from venue to venue."
In this case, for example, were also employed 3 SuperMotion cameras by Grass Valley, LDX86, that create 3X images with 75 frames per second, three times more compared to the nominal speed, in order to have fluidity in slow motion.
Two of them were placed six meters away from every corner, from the main grandstand, and the third was in the stands next to the main camera.
Lombardini resumes: "The tv compound is very functional, fifty people are engaged, and during the match some cameras of the national feed are shared and operate for the international feed too."
"The two mobile production units are connected by optical fibers and no extra cable has been extended."
"The exclusive use of a mono nodal fiber in practice made it possible to transform everything into a single virtual control room."
"In practice, all the signals of the mobile units which produces the national custom feed and all those of the van which shoots the international feeds are interchangeable and co-present. During the proper game time, it is the international feed that uses some of the national feed resources."
"The same happened for replay systems, in fact, the EVS aboard both OBs, thanks to the total networking, are viewed by the operator as a single machine (though scattered on 2 ob vans) having 25 feeds available."
Then two other small cameras located physically at the top of each back-goal were used."
These broadcast class cameras were connected by fiber that carries the signal to the CCU on board. All other cameras were carrying the signals via triax, given that the stadiums are already pre-wired.
Only the retro-goal cameras, the super slow-mo, the ultra motion and the netcam signals were relayed on optical fiber. The super slow-mo cameras used can work with a normal phase at 25 fps or shoot up to six phases, as success in May 2016 into the final Champions Lague in Milan with 46 cameras and using them to 6x, ie dhooting six time speed -650 frames 25 frames (the HD 300i).
Even the video mixers on board are by Grass Valley as well as other equipments; the built-in audio mixer audio video matrix joins a BSE controller; the audio mixer Aurus Platinum is by Stagetech and Nexus is the matrix.
Two goalline GLT Technology cameras virtualizes the images taken from the field and allow to determine if the ball goes into the goal or not.
Even the subsequent transmission is complex and the signals are aired via fiber optics from the shelters of EITowers that are available in most of the stadiums in Italy.
Three feeds were products, World Feed A (main and backup), Feed B Path 1 and Feed B Path 2, which differ in the pre and post game as three very different programs.
In practice, Euroscena creates eight airing chains, plus the ninth which is the "1" followed by UPS, for a total of nine on air chains.
Of these, the main and backup travel via fiber, then 5 chains via satellite uplink plus the direct Camera1 feed useful in case of power crash or any other problem.
The international graphics contributions are received from Deltatre that produces them through a mobile vehicle on the spot and are only applied on certain feeds.