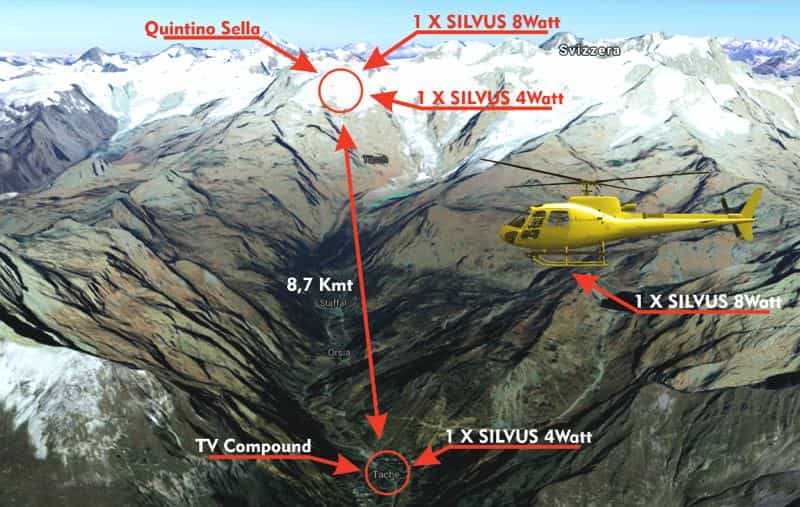 On April 28th, the Monterosa Skialp marathon, the highest ski mountaineering trial in the Alps, took place at 8 am to last over three and a half hours.

The event was followed live by the cameras that captured the spectacular images of history and legend of this live discipline and re-proposed them on Facebook and Youtube live, as well as a summary of the fundamental phases was transmitted by Eurosport and abstracts were repurposed on various abstracts on different websites.

The organization that took care of the event, the Mezzalama Foundation, was among the first to create a live streaming in 2011 and is still committed in creating a live broadcast for such a difficult and important event.
A production company from Trento, GiuMa Produzioni, took care of the artistic and technical realization, relying on MediaNews production equipments.

The layout
Two cameras and a commentary journalist were connected live from the Quintino Sella refuge, which is at an altitude of 3585 meters and 9 km away from the OB-Van gallery, located at the finish line, in Gressoney.
In the finish area were placed three JVC cameras, one operating with a radio link and two on a tripod.
The point-to-point IP connection was made with a combined Sylvus technology radio system supplied by Adcom Srl that also allowed the live intercom and the distribution of mix minus audio signals. The whole event was managed with IP technology, in order to simplify all the coordination between the conductors in Gressoney and the one at the refuge, with video, audio and service communications of a certain complexity.
The wireless system adopted has also avoided the use of the telephone for the commentator.
Furthermore, the same system was used for shooting from the helicopter that was always on the net.
All video signals arrived at the mobile vehicle with low latency H265 feeds, thanks to Viec devices, then decoded into NDI by NC1 I/O NewTek Equipments.

The gallery - made up of a MediaNews OB-van - is made with a heart built around NewTec equipments and operates entirely in IP (NDI).
This made it possible to create a three-and-a-half hour tv broadcast with three camera streams in the finish area without problems, one of which was placed 300m away, plus two on top of the mountain, with the commentator and a Flexcam on a helicopter.
All this went live and the production committed a very competitive budget. All transmissions were made without even needing the optical line, given that the spread of radio links is omnidirectional and exploits environmental rebounds.
The coverage range of the helicopter was several kilometers and the Silvus antennas at the refuge and on the finish line created a perfect mesh net; in fact, as soon as the helicopter intercepted the radio signals it was immediately on the net. This allowed us to have two-way audio and to manage all the production in an unconventional way, making the most of the IP network.

Roberto Musso of MediaNews comments: "We are able to manage everything, audio, video, intercom, etc., completely avoiding conversions, connections, and being able to have the necessary remote devices online.
The Mezzalama is one of the most famous alpine skiing competitions in Europe covering 40 km on foot, with skis on its feet, downhill, with crampons, descending a 3,000-meter slope and involving 900 super athletes from all nations.
Managing a trial that reaches 4500 meters and involves delicate safety issues is very complex and requires a very large deployment of forces.
The result for the organizers is exciting with over 22K views on Youtube and 41K on Facebook live and the impact of being able to have a live helicopter really allows us to offer stunning images.
The situation was really extreme, we worked with temperatures at the refuge of -12 ° and from 60 to 90 km per hour winds."

Production
GiuMa is the production company that managed the edition of this sports program. Mario Barberi, one of the partners, tells us: "We are a small but very active production company, specialized in everything related to the mountain environment and therefore also mountain sports.
We have been operating from Trento since 2013 and we also produce a lot of documentaries and, not surprisingly, always talking about the Mezzalama Trophy, in 2013 we also made a documentary called "Ice Marathon Mezzalama" that won at the Trento and Cervinia festivals. We work a lot with the Alpine Rescue and one of our documentaries in particular has been very successful: "Without possibility of error". There are many TV programs that we produce as the one that will soon be released on the woodsmen that will be radiated by the Discovery Channel."

The race
Barberi continues: "The Mezzalama Trophy is not a simple race to organize and to follow from the media point of view.
We take care of the images and when we called MediaNews we were looking for someone able to bring a video link and other technical equipments at 3585 meters above sea level, or at the Quintino Sella refuge, where we sent a commentator.
Obviously it is not easy to work at these heights and delivering a video signal from the top of the mountain to the valley, at the base point in Gressoney and then redistribute it live.
Also this year we wanted to engage a helicopter equipped with a Cineflex that offered live images thanks to a radio link; and even here the technical problems should not be underestimated and the radio link too had to be special.
So we planned the whole event and decided how to design the technical layout and then we applied to MediaNews to meet certain needs: that is, to transport robust signals and comment by the reporters up to a downstream gallery from which to radiate a live stream from the finish line area.
In addition to the live broadcast, we also created a service of the most important points of the race for Discovery Channel and other televisions and therefore we needed to have four specialized operators working on the slope, able to manage themselves and work at around 3500 meters.
The images were also fed to two fixed post-production workstations that edited the highlights and an emotional video launched around 4 pm, as well as a 30-minute event summary for Discovery Channel Italy.
The direction was taken care of by me following this biennial event since 2001 and all the technical direction managed by MediaNews.
The perceived temperature of -30 degrees, and the winds reaching peaks of 120 km per hour, obliged us to work in extreme conditions.
It is a very difficult race where everything can go wrong any minute, the link signals can be easily fade: a cloud is enough and therefore it is essential to always have at least a B plan to be able to make up for lack of images from the slope.
We generally solve with a series of contributions (like interviews recorded the day before) that are always ready in case of issues and temporary fall of the connections.
Even the human dimension should not be underestimated, for example, just this year one of the operators at high altitude had a high fever and the oxygenation rate too low forced an immediate down to valley transport.
So we had to dab with a fixed camera that provided a lot of useful images.
The positioning and fixing of the rasio link antennas was also very difficult and in fact the help of the mountain guides was decisive.
The streaming was sent to a company in Reggio Emilia that prepared the landing pages and distribution.
Transport signals from Gressoney to Reggio Emilia for the first time traveled on fiber optics, with a guaranteed minimum upload of 115MB, while in the past editions it took place on radio link."