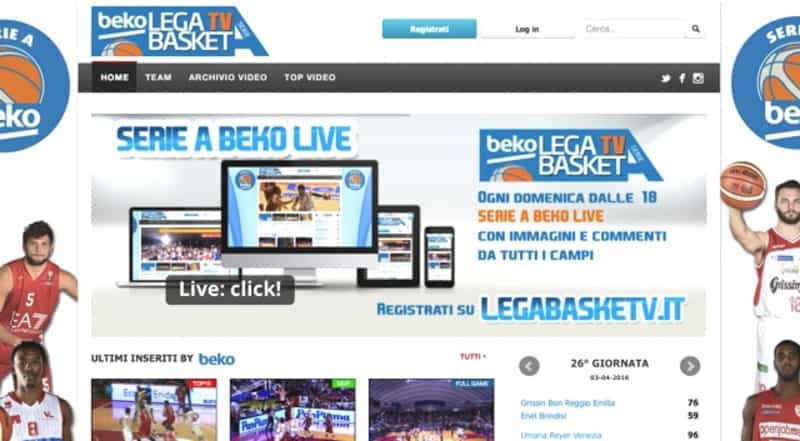 From the two locations, one in Milan and one in Padua, App Media Group, is the company that manages, among many activities, the Italian Basketball League channel. It's the result of a partnership with Basketball League and Fastweb that provided fiber links to and from every arena of male Basketball League Serie A.
Initially all 16 venues engaged in Serie A Basketball were cabled with fiber and KA satellite links and then other sporting locations were added.

The dual satellite and fiber connection is intended to ensure the backup and therefore the absolute certainty of continuity in transmission.
Mario Chiavalin by App Media Group, says: "In every sports arena we have installed an H264 encoder and a PC with special software that allows acquisition and management. So we can take and convey all the images of the game live and deferred if needed, thanks to a signal recording made on site, which also serves as a further guarantee.
At each building a local television production service (usually every sports federation makes arrangements with a local service) shoots and carries two embedded SDI signals, provided with commentary of the visiting team.
Some of these programs are aired on Sky and on Rai and without journalistic comment. An operator also prepares the highlights of all the games and makes them available to the various foreign TV stations, betting tvs, from the Network Operation Center of the Basketball League.
In each hall the service is to use four cameras, two central on top seats on the same side, one that performs narrow shooting and one wide images. Two are placed under the baskets.
The service in charge of filming the matches is generally on site with a mobile vehicle or less often of flight cases; they prepare the program that is broadcast live on regional televisions connected (the list is visible on the league basketball site, legabasket.it) and even an audio commentary. "
On the web channel legabasketv.it a program called "Beko Live" creates links with all the basket venues. The links and services are commented by a journalist and a guest in the studio helps in the comment of the eight games that are proposed in fragments of two minutes each.
Mario Chiavalin resumes: "We boast an average audience of about 20 thousand web surfers as registered users who benefit from the entire transmission among more than 50 thousand subscribers. On http://www.legabasketv.it, once subscribed, one can find the matches of the previous years and all the highlights of each play."
Most of the basket teams are followed from one of the 22 mobile units (!) by App Media Group with technical facilities.
In each venue the images are shot with 4 Sony cameras and/or Thomson Grass Valley with long lenses. Long opticals for close ups, while wide angle lenses shoot the whole action. The replays are often set forth by the long lenses and close up cameras.
Graphics are created by connecting an interface to scoreboards and a designated PC follows the 24 seconds of the timer with the results.
The service also provides the signals of 4 independent cameras directly on a machine called "Instant Replay" which is available to the judges. If they have doubts on an player action they can review the images of all 4 cameras and then decide whether or not to endorse any foul or irregular action.
In commentary booth we find a monitor, two headsets, plus two speaker areas and in some halls we also find an edge-journalist realizing interviews. Two are usually the reporter positions, one for the host team and one for home team. The service makes two recordings, a priority for the visiting team that goes on the air and one for the home team, which is issued after the game. The audio recordings are made from the cameras, each with a microphone that records audio effects; a channel is used for effects and one for the comment.