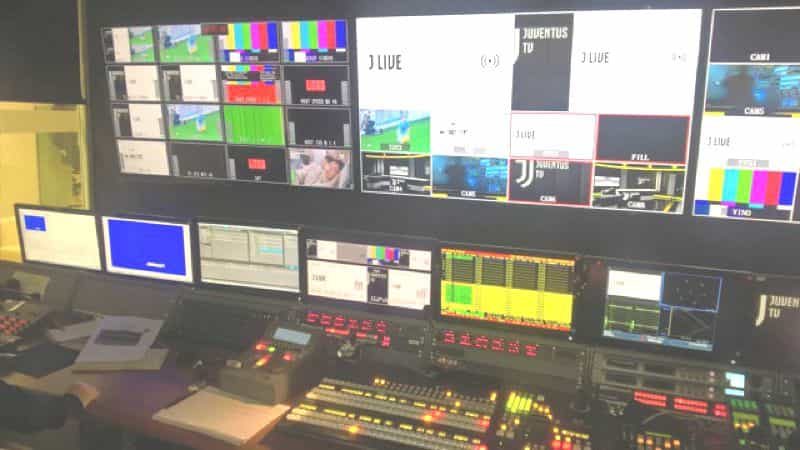 All in the heart of the stadium

Juventus TV, the sat tv channel created by the Italian Serie A homonymous soccer team, was completely renewed in 2106.
All media AV contents are made directly bu the editorial team under the direction of Claudio Zulliani within the Allianz Stadium in Turin.

Zuliani, in close coordination with Federico Palomba, Head of Marketing and Digital and with Claudio Albanese, Head of Communication and External Relations, is flanked by Monica Somma and directs an editorial staff composed of Antonio Romano, Paolo Rossi, Simone Stenti, Enrico Vincenti and Enrico Zambruno.

The Allianz Stadium is rather unique in Italy, where the public's entertainment is considered at least as important as the matches and it is no coincidence that inside there are several restaurants, a museum, a shopping center, "the Legends", the store, a medical center and a lot more.
Here the team has created a super complete media production centre and the stadium is part of a larger digital project branded "Juventus", which involves TV, social media and web.
The media center production is divided into four distinct locations starting from the core of the tv channel inside the stadium with the editorial staff, the post-production suites, the graphic areas, and two shooting studios.
The Milanese 3zero2tv is a strategic partner company for producers, TV publishers and players interested in the creation, production and distribution of TV and video programs everywhere, on every device.
It is no coincidence that this company was chosen by Juventus TV as a global specialist for playout, video production, outside broadcast and digital service operations, and therefore here 3zero2 manages all the executive production of the channel from production to directing, post production, outdoors shooting ald live web and Facebook in several languages.
Luciano Consigli Director Technical & Operations at 3zero2tv passes us further details:
"The stadium is completely pre-wired with fiber optic connections from and to any hot spot, from the pitch view studio overlooking the court to a second studio dedicated to live broadcasts and recordings of entertainment columns and some news daily editions.
Fibers also continue in the field and cover the various useful areas such as the pre mix area (where the buses arrive), Sala Agnelli, the museum and the conference hall; then they also reach the TV compound from which it is possible to intake the whole series of signals produced by the Host broadcaster during the official matches."
"In fact, for the Serie A matches and some of the Champions, 3zero2tv also both the role of host broadcaster, so we are able to connect directly to the EVS on board the mobile vehicle for the download of low-shot cameras and other contents that are produced right by trailer that creates the international feed.
Another important point of presence at the moment is Vinovo, the Juventus training center where both the official team, the Primavera, the "Giovanili" and the Women's Soccer reside."
"Here from the training camps we are able to record interviews with players, coaches, team executives, and during the week we also produce some in depth sections dedicated to the Juventus world."
"Also at Vinovo training center, all the games of Primavera are played and are produced in remote production or with a small OB-Van."
"To this profile is added the new headquarters of Juventus, Continassa, or "Cittadella della Juventus", a village in front of Allianz Stadium that collects the new Juventus directional headquarters and the new training camps of the Serie A team."
"The move of the Juventus team from Vinovo to this new area will take place during the summer of 2018 while Vinovo will remain the home of Primavera and the Giovanili."
"In Vinovo there are editing suites, eng troupes and remote cameras that can be driven from distant locations and a direct fiber optic link up to the main gallery in the stadium."
"The entire channel is aired at the 3zero2tv headquarters in Cologno Monzese.
This allows us to avoid a 24-hour presence inside the Allianz Stadium where, instead, we are present during production hours."
"The channel produces seven days a week from 11 am to 8 pm and sometimes until midnight, while night time coverage - mainly with replicas - is carried out by the centralized playout in Cologno."