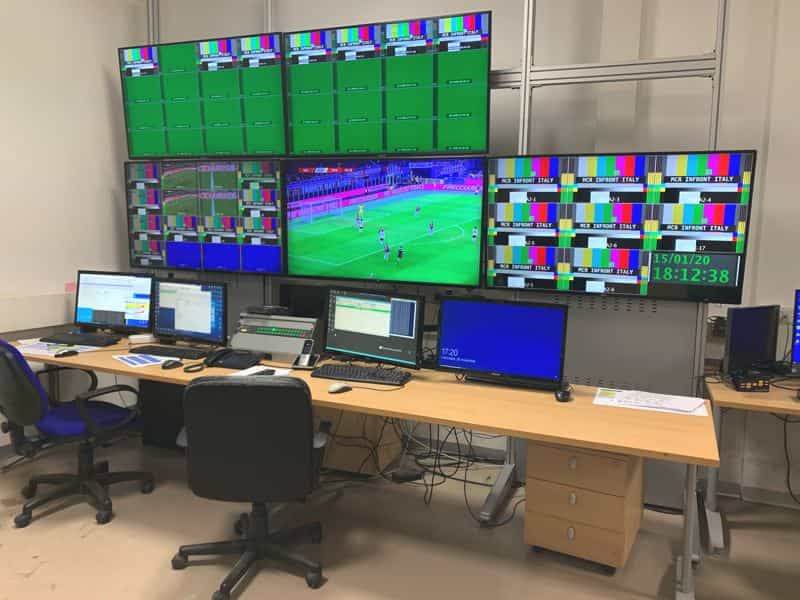 Three years after the official entry into the pan-European Euro Media Group, Netco Sports Italy can rightly be defined today as an absolute reference for sports graphics based on the management of data processing and the proposition of multi-language content. More generally we can talk about "multi platform and multi device implementations with high graphic contents".

From here all sports pass and, in particular, Serie A, Serie B, Serie C football, and then from here the re-proposal of multi-platform contents that affects linear channels, the OTT world , mobile applications, widgets, graphics, augmented reality, virtual reality and social media is managed.

This specialisation derives from the recognised ability to manage the huge quantities of unstructured information data arriving from the football courts in an organic way. Netco Sports Italy proposes a structured and synchronised way thanks to their skills, intertwined, between technique and graphic creativity.
Behind this ability to aggregate data and make it useful, usable and monetizable as "captivating entertainment", there is an important technological system.
Physically located inside the headquarters in via De Ruta in Milan, this technological core has grown over the years and, in fact, it is the true hub of the whole world of sports, and football in particular.

The core
The high-tech systems of this heart here are in continuous connection with the team headquarters and the stadiums of the Serie A, B and C through data lines, along with the privileged audio and video lines.
From these hotspots all the information converges at the Netco Sport Italy headquarters and all the data collected is aggregated and reworked, thanks to a series of proprietary software developments.
This made it possible to adapt and structure these data and news feeds according to the needs of B2B customers and consequently, to perfectly cover the needs of television viewers and all users of this data on cross media channels.
The data, in fact, becomes structured, continuous and full-bodied feeds that typically affect sports broadcasts - and this constitutes the main part of Netco's core business - but more and more often today they also represent the information framework of several websites, where the enthusiasts manage to find complete insights.
In fact, today, the exclusively mono-directional and linear world of television often gives way to the bi-directional typical use of the web, PCs and applications for mobility where customisation and segmentation are constant.

Data processing
From the stadium, the data collected is channeled into the Netco Sports facility in Milan which, through a data processing system and cross-media capabilities, processes and outputs it to the various platforms, with a series of collateral in depth analysis.
It is no coincidence that there are many print and web publications that refer to Netco Sports for definitive information on many actions that occurred in the game, such as the speed of a kick, rather than the elevation of the player in a jump, with details on the relative head shot and other curious data.
Netco Sports Italy has automatically become the reference supplier to those media that gravitate around them and as a supplier of information for the various leagues.

Furthermore, at the turn of the new year, the rankings of the League have been expanded, rewarding the best player of the month in the various roles.
This can only be achieved thanks to the database collected and processed weekly and the important collaboration, lasting four years now, with Stats.
This allows objective data to be produced that lead to real rankings based on recognised principles and patented algorithms.

Multilingual feed
Netco Sports Italy, as it is known, dedicates the bulk of its strength to all-round television graphics; an aspect that has always been central to television video, and even, over time, has become predominant, as well as highly engaging and spectacular.
To take this specialisation further, an important proprietary remote titling system has been created that allows sending of feeds which, according to customer needs, are multi-languages.
Therefore, starting from the same centralised operating base and from the large sports database, different graphics and extremely different ad hoc sponsorships can be tailored to the various feeds distributed all over the world.
For Serie A these procedures are now acquired and consolidated; while as regards the Serie B the foreign rights market is starting now, chasing a recent need.
Serie C, which is made up of 60 teams, exclusively affects the entire Italian peninsula.

The technique
From a technological point of view, the matrices and signal routes are made by Evertz equipments, while the whole core business of managing and processing big data is made with Dell equipment.
The software that oversees this operation are owners of Netco Sports Italy and have been conceived and created in the house right because the "customisation" for each customer in this context is fundamental.

Renato Pizzamiglio CEO of Netco Sports Italy underlines: "There are certainly "pre-packaged industrial softwares" on the market that are considered more advanced than ours, also for the quantity of tools available. Our choice here is well motivated so much so that from the beginning we wanted to focus on an OEM built system that would allow us to customise each layout and all content according to the actual needs of each customer.
This allows us to express unique abilities and to act with very short reaction times by fulfilling customer requests for modifications and adaptations extremely quickly, thus managing to overcome the "rigidities of the giants".
In practice, our choice was made on a dual directive: on the one hand in favour of a hardware base that would guarantee the maximum in terms of reliability and performance, on the other with the highest elasticity and possibility of further software developments. That's how we can easily feed all the League sites and all the sites that make requests to them with data, info and graphics".