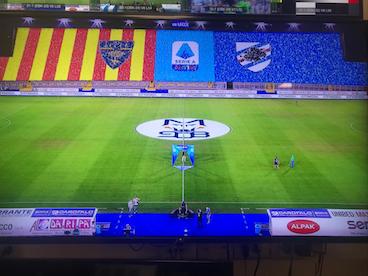 The unreal becomes more real with Netco Sports
After the Covid-19 emergency of the first months of 2020, the coveted resumption of sports activities, starting from the Italian football championship, had to deal with a less spectacular television show of the matches due to the total lack of public in the stadiums.

The empty stands and the lack of enthusiasm of the fans have removed a lot of "color" from the matches and forced the various football leagues to verify the possibility of "putting on the field" even imaginative solutions to try and make the matches more attractive, starting from the concept that "graphics bring you into the match".

During the game home spectators are mainly focused on the action and the player in possession of the ball; unfortunately, however, there are some moments such as the pre-game, the interval and the post-game in which the tv images are really empty, without appeal, precisely because the large frame captures the desolation of the empty stands in full.

Starting from this consideration, one of the four Italian subsidiaries of the international Euro Media Group, Netco Sports, in cooperation with ISC, has decided to develop the "virtual" dimension beyond the usual limits and propose some practical solutions with an interesting budget.

After some simulations, the Lega Calcio Serie A chose in favor of a "simplified" virtualization to be applied, precisely during the pre-post game and in the interval. 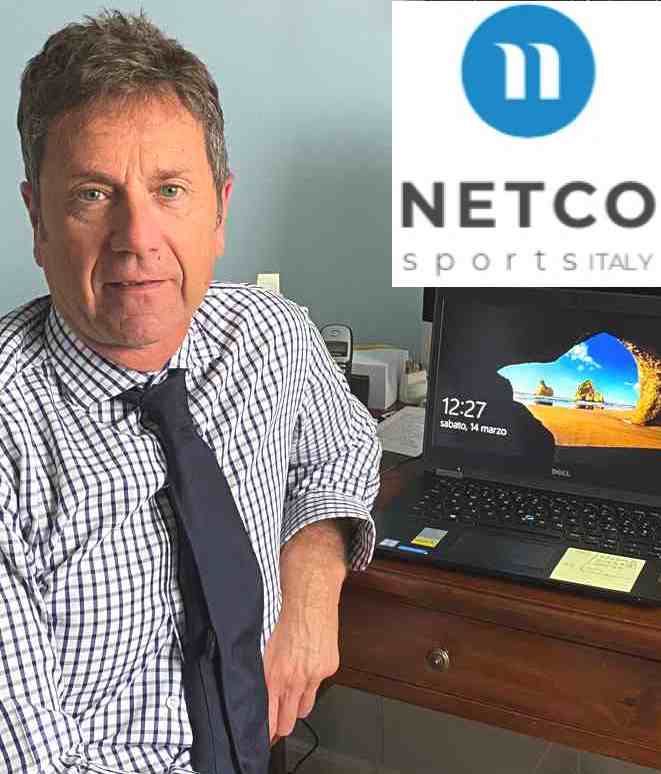 Given the physical impossibility of going to the stadiums during the quarantine to carry out punctual tests, during the proposal and testing phase Netco Sports had to recover from their archive static images of the stadiums in some broad perspectives and create renderings that could return the idea, that is simulating what the final output would have been, but in offline mode.
After the static tests, it was necessary to understand the potential of the system because it was crucial to understand if even in a camera movement, such as a pan or a zoom, this technology would have always allowed to view the virtual graphics in the right perspective.

The next step was, therefore, to test these graphic elements within a technology that also included tracking.

Claudio Cavallotti, Netco Sports Sales General Manager, explains:“After some very positive tests, and checking that there was sufficient elasticity in the movements of the camera, we took the field for the Italian Cup and performed a final test, in real time, during the game.

This led to an approval by the Football League which decided to have all the remaining matches played with this technology until the end of the championship, about one hundred games spread over just 30 days".

Netco Sports thus started with a complex preparation phase - lasting three weeks - which served to create a mirror digital graphic model for each stadium, since they are all different and each has its own perspective for the chosen shots. 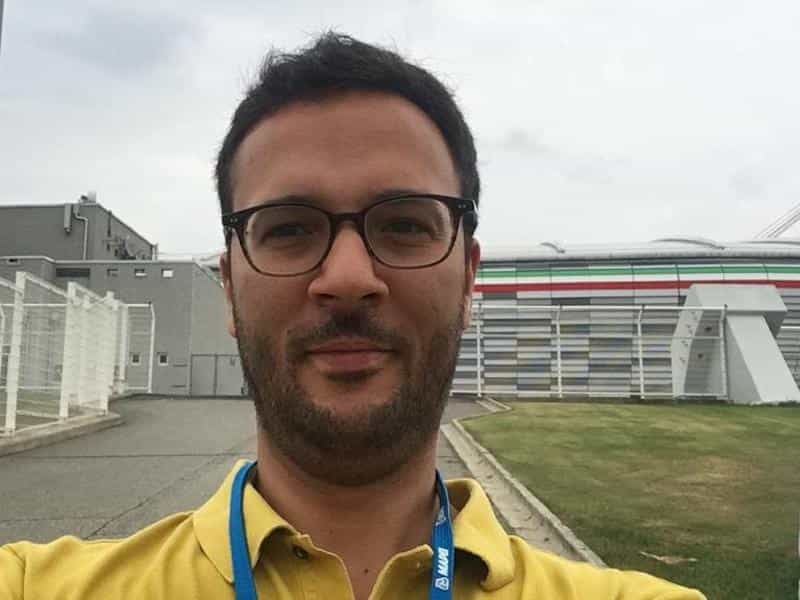 “Each game implies the creation of different renderings from a different shooting angle with different logos and graphic contents, therefore a very heavy effort.

In each stadium we started from a "beauty" shot, that is a static image in long shot created thanks to the main camera 1 (the one that follows the game in the match) positioned high on the stands in the central grandstand and from that the mathematical model was rendered.

Then the central graphics engine applies tracking capabilities that allow to make different optical movements and connected shots, while maintaining the right perspective with the lively graphic elements added in virtual mode".

During the "normal" game, in the match, the graphics added in place of the stands could be a bit annoying or useless, since the stands are perceived only for a few rows.

In the pre-game, however, the shots often follow small groups of players, the stands are very visible and the tv director here has the opportunity to add interesting elements of virtual graphics that make the match more lively.

The same is valid for the interval and the post game.

These are also the same broader and steadier shots in which, in "pre-Covid" games, it was usually used to insert the classic "linear" infographics with statistics, formations, athletes performances, etc. 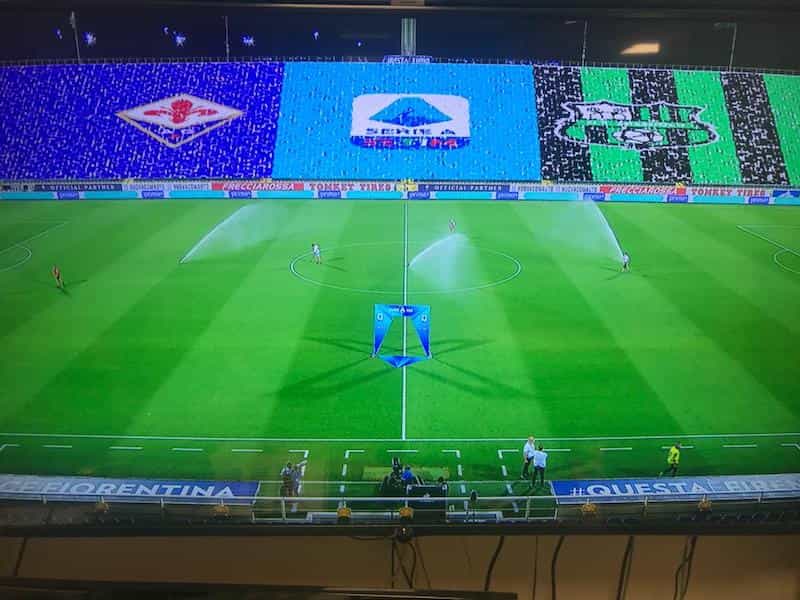 Netco Sports technology allows to compose a complex image that collects various elements: the live image in the foreground with the players, the overlaid linear graphics, the image of the virtual stands in the background, as well as a virtual circle positioned right at the center of the field where each club can insert their own colors, logo and the sponsor they prefer.

This last virtual element allows the sponsor to have a new opportunity for visibility, creating a new element in his marketing mix.

Claudio Cavallotti continues: “During the testing phase we had also proposed more substantial interventions for further enhancement of the images through virtual graphics, to be implemented in other phases of the game.

This would have required a different and even more demanding technical setting; however the profile that was decided for this phase and in full agreement with the customer is still very effective and avoids the use of complications such as additional hardware, image recognition, sensors and more”. 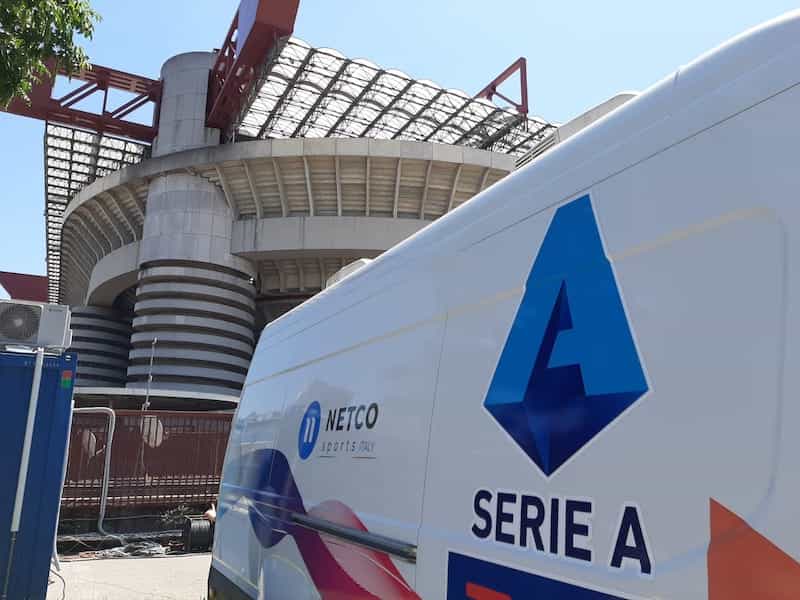 In production, stands colored with satisfaction
On the day of production, you just get to the playing field and import the model of the stadium concerned into the production graphics engine.

Then some tests and calibrations are carried out with respect to the models already created at the level of animated graphic rendering, to guarantee the best possible tracking.

The software, a sophisticated virtual placement graphics engine, thus educated makes some virtual lines coincide with the respective real lines of the field.

When, for editorial needs, the director requests camera movements, the software interprets the request and returns the correct positioning of the graphic and virtual elements to be applied to the field and geometrically arranges them correctly.

The setup just described and the briefing with the director usually take a couple of hours before the event to get to the game on air with the best possible optimization.

The image that the viewer receives at home is made up of live elements, other graphics, other dual-purpose virtual elements.

The video output of the system in 1080P or 1080i SDI is fed to the video mixer that takes care of the airing. 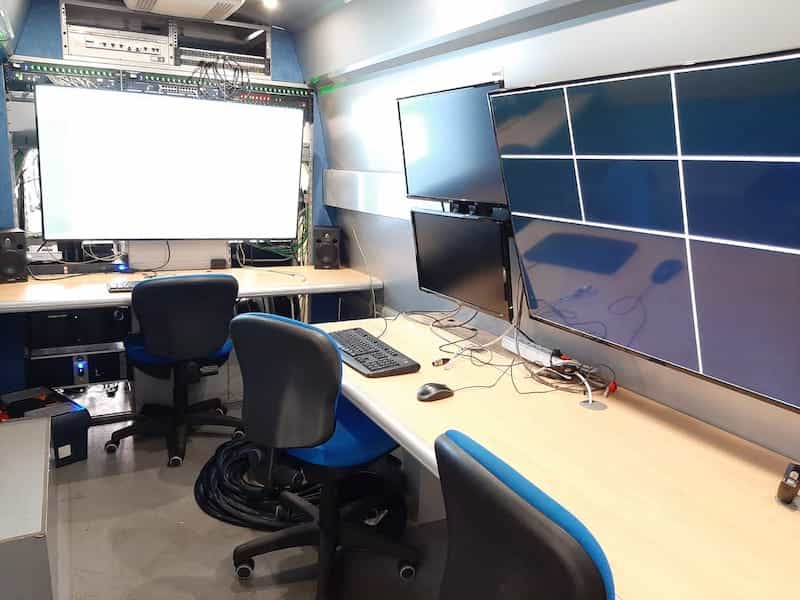 "Netco Sports for these events provides a mini van on which three people work at full capacity and the equipment for the generation of all graphics, statistics and now also the management of the virtual stands and the sponsor logos, thanks to an additional operator than usual.

In the stands, two specialized operators manage the statistics of athletic performances.

For this long run of matches we deploy eight OB-Vans and over eighty people".